Yogi Berry: Another Way to Cool off on a DC August Day

I don’t remember when frozen yogurt became a sexy national trend again. Perhaps it was a few years ago. This time around, the trend has apparently been centered about tart frozen yogurts. In DC, there is one such shop, Yogiberry, that is locally-owned and operated. One of their shops is near me on Connecticut Avenue, and since they carry a chocolate flavor, and since the heat is creeping back up in DC after a brief respite last week, today seemed like a great day to check them out. 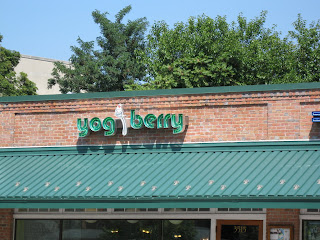 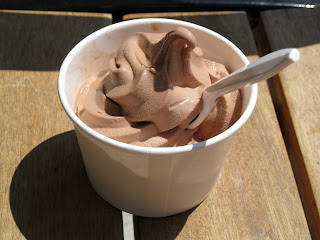 This “five ounce” dish that looked more like 6-7 ounces set me back $2.95 was the smallest portion offered. However, since the yogurt was light and fluffy, this wasn’t as overwhelming as it would have been if I’d gotten some ultra-dense gelato or ice cream. The texture, in addition to being light, wasn’t icy, though when melting it seemed a tad more watery than creamy. The chocolate flavor was noticeable and seemed natural rather than artificial, but it wasn’t strong enough to last more than a split second. The amount of sugar incorporated into the treat was just about right, but I could have used a stronger chocolate flavor. Still, at 25 calories an ounce, this is a pretty nice deal for a summertime treat.

Yogi Berry: Another place to grab a cool treat on a hot August day in DC.

Pros: Smooth texture, not too sweet.

Cons: A little watery and not too chocolatey. The cocoa syrup could help.