In the DC bakery scene, Georgetown Cupcake is one of the most famous, especially since TLC made a reality show about the shop that started airing a couple of weeks ago. Even before that, Georgetown Cupcake was so “in” that the lines often stretched so long that it took 90+ minutes to get to the order counter. I’ve been able to eat cupcakes that other people stood in line for, but have never understood why it’s considered worthwhile. I recently discovered a strong contingency of naysayers who say that Baked and Wired down the street is by far superior and has much shorter lines, so I decided to investigate this afternoon.

Ever heard somebody say that wild horses couldn’t keep them away? Well, wild road construction couldn’t keep me away from Baked and Wired. 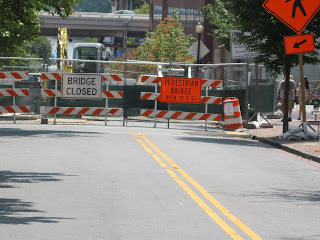 Fortunately, the pedestrian access is unaffected, and I’d already parked at an open spot I’d found two blocks away. On to the shop without a line stretching for blocks. 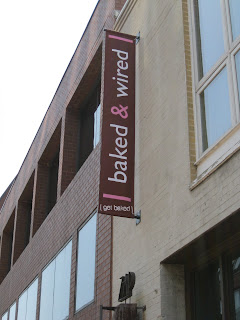 Once I got inside, there was a pretty short line that ingeniously took all the customers right past every single baked good available for purchase. I spied a caramel s’more bar that looked delicious and thought about that, but when I asked the very helpful counter staff what a chocoholic should check out, they suggested one of the brownies. I settled on the Nutella brownie and vowed to come back later for the s’mores bar, which I was assured would be available year-round.

The brownies are large but not so supersize that they can’t be enjoyed by just one person, and upon unwrapping, the chocolate aroma emerges so quickly that I had a hard time taking the picture before sampling the brownie. 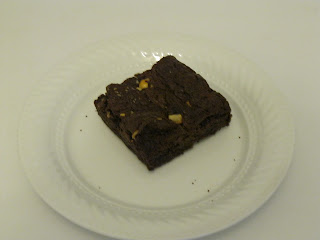 The first bite reveals a texture that is between cakey and fudgy, but is a tad closer to fudgy, which is my personal preference for brownies. 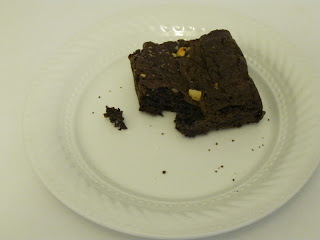 While the chocolate aroma was distinct, the flavor wasn’t quite as strong as I was expecting based on the aroma strength. Baked and Wired uses Callebaut in their brownies, so the quality was good, but I could have used a little more chocolate intensity. The good news is that the brownie wasn’t too sweet, so the less-than-full-intensity chocolate flavor wasn’t overpowered by sugar. The Nutella flavor also wasn’t that noticeable except where sparsely woven across the top, which left it a bit dry after baking, though it was a nice treat on top of a solid brownie. The brownie was also topped with some hazelnuts, which added a nice crunchy texture contrast. In fact, some more hazelnuts might have enhanced the brownie overall.

Baked and Wired: Many tempting creations available, and I only stood in line for five minutes to get to the register.

Nutella Brownie: Solid brownie with a subtle addition of Nutella. Chocolate flavor could be a bit stronger.

Cost: $3.50, which is pretty reasonable given the Georgetown location and the size of the brownie.