Is there any better gift than chocolate from a locally-owned shop? It’s fresh and even more delicious because the chocolatier can experiment with more delicate flavors that may not hold up very well over time. I was fortunate enough to receive a 16-piece box of chocolate from Artisan Confections (1025 N. Fillmore Street in Arlington) as a thank-you gift earlier this week, and couldn’t wait to sample these DC-area treats. 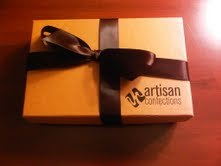 Upon opening the box, it is clear that the shop founder, Jason Andelman, is committed to delivering a visually-pleasing product. 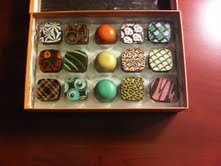 The artwork on some of the chocolates is so astounding that they’re almost too beautiful to eat.

Almost. In the interest of prolonging the lives of some of the more intricately-decorated pieces, I started with the Cinnamon Caramel. 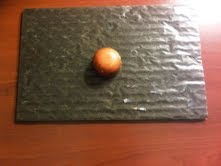 While the outward appearance is not very notable compared to some of the other pieces in the collection, a bite inside reveals an exceptionally smooth caramel filling with a hint of cinnamon and just the right level of sweetness. 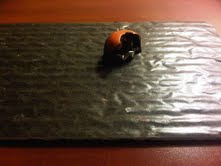 The dark chocolate shell is thin and smooth with an outstanding temper, which enhances the strong flavor. The end result is a chocolate that is most certainly worth a special trip to the Artisan confections shop.

Moving on to the more artfully-decorated chocolates, I tried the Passion-Fruit, which had a design of daisies on the outer shell. 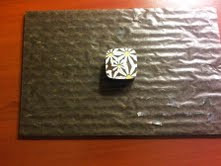 Inside was a smooth, tart gel with a tiny bit of sweetness. 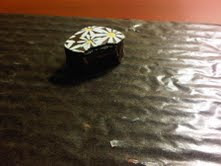 The passion-fruit flavor, while pleasing and delivered in ultra-smooth gel form, overwhelms the chocolate a bit. I would call this a “chocolate-covered candy” rather than a “chocolate.”

I finished up the night’s sampling with the Pistachio-Cherry piece, which is presented with the same ultra-smooth dark chocolate coating and a pink-swirled top. 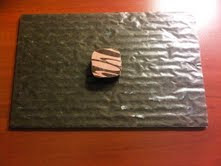 Inside are two layers of ganache: pistachio on the bottom, cherry on top. 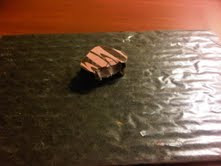 The cherry flavor is noticeable but subtle; the pistachio flavor is even more subdued, which allows the chocolate flavor to shine in this creation. The ganache is a tad thick but has a pleasing consistency. The overall result is a high-quality chocolate creation that is worth a second (or third or fourth) bite.

Cinnamon Caramel: Wonderful chocolate with a hint of cinnamon

Check back later as I sample more of these gems.
Posted by Victoria at 1:27 AM 0 comments

Yesterday, I picked up some chocolate at the Tenleytown Whole Foods. Among the loot was a bar of Scharffen Berger Bittersweet Dark Chocolate. I decided to sample and evaluate this bar today – which means that it lasted nearly 24 hours in my kitchen without being opened. Look Ma, an unopened chocolate bar in my kitchen! 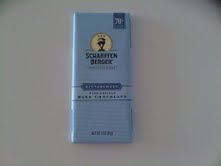 Upon unwrapping this bar, I noticed a nice, uniform appearance to the chocolate, which indicates a perfect (or near-perfect) temper. 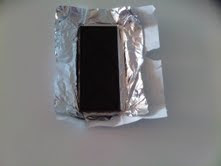 The aroma wasn’t very intense, so I was left to further evaluate the chocolate by eating it. The bar was labeled as 70% cocoa solids, so I was counting on something relatively bitter. It turned out that there was a very pleasing amount of sugar – enough to cut the bitterness a tad, but not so much to overwhelm the intense flavor of the chocolate. The flavor was distinctly earthy with a bit of a subtle coffee note, and the legendary effort that Scharffen Berger puts into selecting their beans was evident.

Strong points: Smooth texture with a good combination of bitter and sweet

Weak points: A little on the pricy side, but good chocolate is worth it

With the unbearably high temperatures we’ve been seeing in DC this summer, I’ve been thinking a lot about citrus-chocolate combinations. I contemplated citrus-infused truffles, but really wanted to bake. I then started exploring citrus cookie recipes, in hopes that some of them might have chocolate. What I found in my 1998 Betty Crocker Cookie Book was a recipe for key lime coolers, which are traditionally covered with a lime glaze. I reasoned that the cookies could instead be covered with white, milk, or dark chocolate. With a recipe for inspiration, the quest began.

*Adjusted from original recipe. The vanilla quantity was increased, the lime juice was added.

After preheating the oven to 350 F, I started with the softened butter and powdered sugar. 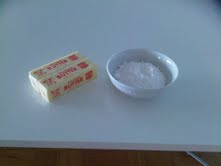 I beat those together with an electric mixer (Kitchen Aid Stand Mixer highly recommended). 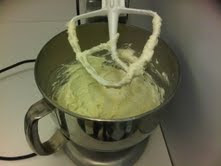 That resulted in a blend of sugar and fat. Yum! Flour and cornstarch came to the rescue to make it dough-like. 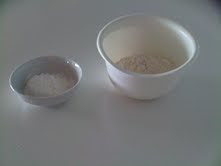 I mixed those in and to arrive at a nice shortbread starter, but it was more or less flavorless. Lime zest and vanilla were supposed to help with that. 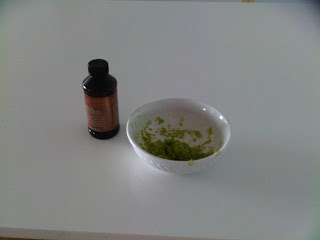 Unfortunately, there was minimal lime flavor in the dough. In the cookbook recipe, the glaze called for a good deal of lime juice, so I added a teaspoon of lime juice to the dough account for the fact that these wouldn’t have the lime glaze. The dough was now complete. 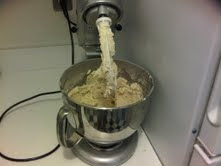 The cookbook recipe called for 1-inch balls of dough, but I made 1/2-inch balls to increase the chocolate-cookie ratio. 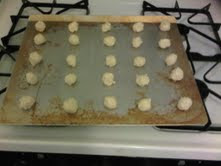 To flatten the cookies for optimal chocolate-dipping shape, I used a high-tech tool known as “the bottom of a glass,” and dipped it in powdered sugar before compressing the balls of dough. 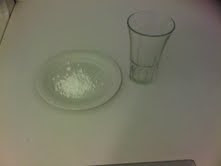 The result were round, thin-but-not-too-thin cookies. Into the oven for 10 minutes... 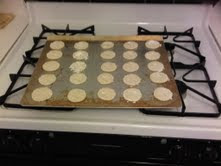 They came out of the oven looking pretty good, and then went into the refrigerator for a couple of hours before the chocolate coating began. 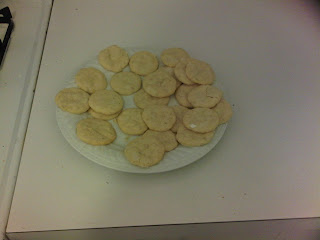 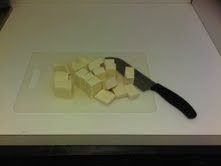 Once I melted the white chocolate, I let it cool a bit so that it would leave a thicker coat on the cookies. 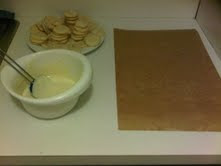 Then it was time to dip and let the final product set on parchment paper. 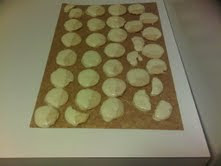 The lime and white chocolate work nicely together. My only regret is melting too much white chocolate, which meant that I didn’t have enough cookies left to try this with milk or dark chocolate. Next time!

Posted by Victoria at 9:05 PM 0 comments

I live in the District (of Columbia). I love chocolate. A lot.
This blog will feature discussion on different types of pure chocolate and chocolate bars, as well as chocolate desserts and artisan chocolates available in the DC area. Since I happen to travel for work on a regular basis, other locales will be featured from time to time.
I also happen to love baking, especially with chocolate, so there should be many recipe-related posts to come.
Posted by Victoria at 5:54 PM 0 comments