Boston: Yeah, I Went There Again

As noted in Friday’s review of the Hotel Chocolat Salted Caramel Puddles, I was going to be running right over to their shop this weekend. But…have they set up shop in DC? No. THAT would be far too convenient. But I did manage to get myself to the one city in the U.S. where they do have such a shop: Boston. 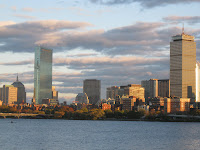 I love this place. Even though I usually spend a lot of my time there in Cambridge, which is where I met up with the lovely Carla for some hot chocolate and delightful conversation at L.A. Burdick. 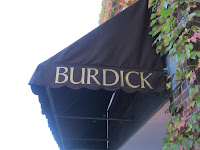 She was kind enough to then take me over to Cardullo’s, a little deli/grocer in Harvard Square with a massive chocolate collection. 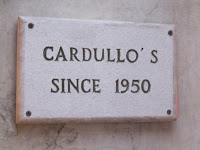 Chuao! Finally, I found you. 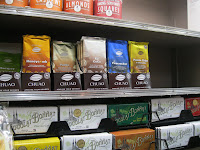 Now don’t fret, I didn’t forget about Hotel Chocolat. I braved the cold sleet to find some lovely treats on Newbury St. 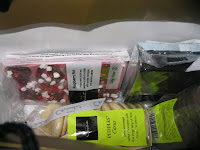 And did I mention the sleet? Which later turned into disgusting, heavy, wet snow? I feared that this would stop my fellow swimming alumni from coming out to dinner after our little meet on Saturday. I mean, just look at it. 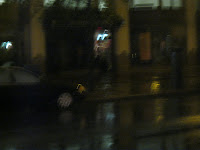 Fortunately, one of my good friends has an in at Poe’s Kitchen at the Rattlesnake Bar and made sure it was worth everybody’s trip. With flourless chocolate cake at the end.

Flourless chocolate cake: worth venturing out in a Boston sleet-fest, or not?

You know how I’m like never at home in DC? And how my job sends me off to every corner of the country?

Well, today I’m running away from DC again. But it’s not for work. Shocker. This time, it’s a trip to Boston for the annual MIT Alumni Swim Meet, which is literally one of the most fun events I attend all year.

I lead an exciting life, don’t I?

Well, here’s the other exciting thing: I’ll get to go to Newbury St. and visit Hotel Chocolat, where I can pick up delicious goodies like these Salted Caramel Puddles. 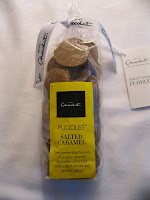 Yes. Puddles. Puddles of milk chocolate with bits of salt and caramel mixed in. 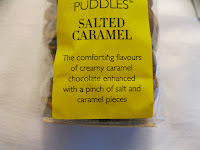 The Hotel Chocolate puddles are all thin wafers that are easy to nibble on, and that are a perfect thickness to slowly melt on your tongue. The salted caramel puddles in particular offer a very thick melt that brings out a toffee flavor immediately. 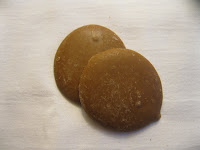 Caramel and vanilla flavors follow that initial hit of toffee, along with a bit of cream. There is only a hint of salt, and perhaps a bit more to cut through the sweet milk chocolate and caramel pieces would be helpful. The caramel bits themselves are like pieces of coarse, caramelized sugar, and detract a bit from the smooth texture of the milk chocolate, but accent the caramel flavor. I’m a bit torn on the approach, as I like the resulting flavor but not the resulting texture.

Hopefully there are more puddles of a different character awaiting me tonight.

What was the last place you visited for fun? Did you buy any chocolate there?

Posted by Victoria at 9:44 AM 9 comments

You see, for the Bake Together event that Abby Dodge is hosting from up in Connecticut, we were charged with making a sour cream coffee cake with streusel. Oh, streusel, how beautiful you are atop any delicious breakfast treat. 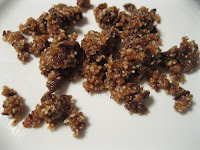 Or, you know, unbaked in a bowl. Your choice.

In any case, I knew I needed to join in this month. And then, during a very, very long run last weekend*, I thought to myself…what if I tried a gluten free version? Yes, what if…what if indeed. What if I replaced the flour with almond flour? 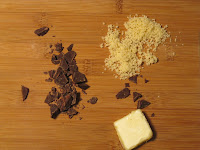 That way, you have even more fat. And how can that be a bad thing? Surely the resulting batter will be tasty. 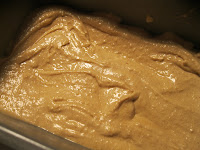 Oh, and it was. It’s just that the final product wasn’t exactly cake like. It was absolutely delicious, completely gluten free, and a delightful breakfast treat. But coffee cake? Not so sure about that. In any case, perhaps you have a friend who maintains a gluten-free diet and you’d like to have them over for brunch. Well then, do I have the recipe for you.

*Almond flour can be expensive, but can be made by simply running blanched almonds through a food processor.

To make the streusel:

In a small bowl, combine the brown sugar, almond flour and cinnamon. Mix with melted butter and chocolate.

To make the cake: 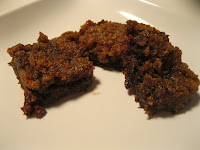 So it doesn’t look very pretty or cake-like. And the streusel didn’t separate well. But it was delicious. Dense, gooey, and dressed up with a touch of chocolate.

And really, maybe I screwed up Abby’s recipe. For that, I am sorry. But I will not apologize for combining butter, almonds, sugar, and chocolate and calling it breakfast food.

Have you ever tried to make gluten-free cake? Did it look better than this?

*This alone should caution you against running 21 miles straight, because it will result in many things seeming like good ideas when they, in fact, are not. Such as attempting gluten-free coffee cake on the fly. Or deciding to go ahead and tack on an extra 5.2 miles three weeks later.

Though I’ve made mention of the upcoming name change at Biagio, I have yet to see a fully-Cocova-branded chocolate tasting. I thought this month might be the one, but it appears that they’re still working through their stockpile of “Biagio” branded stickers. 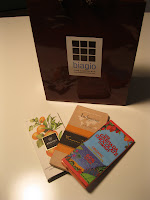 What is that old saying? A rose by any other name blah blah blah…anyway, they still have a ton of outstanding chocolate, helpful staff, and free tastings. What else do you need?

I’d happily show you some photos of the tasting itself, but I went with somebody who doesn’t know about this blog who might think I was strange if I decided I needed to take pictures in a chocolate shop in a basement off 18th St.

Anyway, no pictures, but let’s talk about a few of the stellar bars up for sample.

Next time there is a tasting, I’m pretty sure that the bags will read “Cocova” and the name change will be all set.

Next time, I’ll also have a camera. I promise.

Have you ever left a camera at home because you would feel weird taking pictures?

Before I get down to business with today’s delightful chocolate creation, I am going to deliver some earth-shattering news that will affect your day in ways you can’t imagine.

I’m going to start posting Mondays, Wednesdays, and Fridays, as opposed to every day, for the foreseeable future. This probably makes you very sad. That’s OK! Embrace your feelings. It’s healthy. And in case you miss my daily dose of sarcasm and chocolate talk come Tuesdays, Thursdays, and the weekends…just find me on twitter. Or meet me for a swim. Or perhaps a bike ride. Plenty of snarky conversation will ensue, I promise.

Alright now. Administrative update complete. Time for chocolate. Today, we’ve got a bar that reminds me a bit of summer, which seem entirely out of place with the fall weather and slowly-changing leaf colors here in DC. 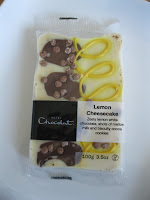 This beautifully-constructed bar has a clear lemon aroma with a hint of cream. That lemon flavor emerges immediately, but doesn’t have any sour bite to it, and seems to draw its flavor from lemon oil. 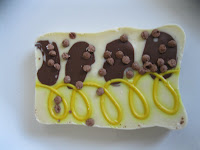 The lemon flavor is complemented by a tang reminiscent of cheesecake; the smooth melt and sweetness of the white chocolate make these delicious flavors even more enjoyable. The milk chocolate, while sparse, adds a hint of caramel when you hit it, similar to a thin caramel topping on a cheesecake. The overall blend of all these flavors is just like a lemon cheesecake with a bit of light caramel sauce.

In other words, I love this bar. Love.

What dessert would you like to see captured in cocoa butter?

Actually, it’s more like fifteen-upping, given how good most of your treats are, but I digress. This time, you’ve gone and taken the Payday bar and turned it into something edible with your peanut honey batons. 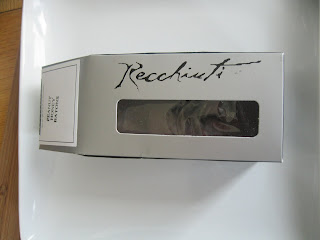 This remake of a classic candy bar is obviously far better than the original, if for no other reason than the use of far superior chocolate. In this case, the couverture was buttery and not too sweet, with subtle coffee and earthy flavors. 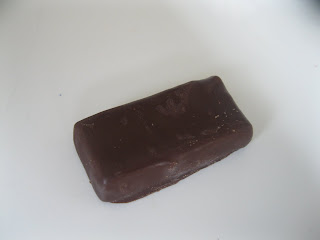 The peanuts inside were crisp and flavorful, and comprised most of the interior, with the caramel simply filling in the gaps. That caramel had a hint of honey, and was soft but not runny such that the couverture blends with it seamlessly with each bite. 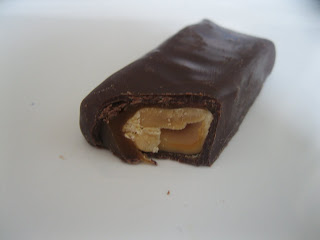 Every inch of this is a pleasing combination of caramel, peanuts, and caramel.

Now if only the CVS a block from me carried Recchiuti. Ha.

Are you jealous of all the delicious chocolate I picked up from Recchiuti in the Ferry Building in San Francisco? It's OK to admit it.

It’s probably obvious from the previous 458 posts on this blog (go ahead, count them) that I like chocolate. So, a dark chocolate caramel covered in dark chocolate would be just an awesome thing, wouldn’t it?

Recchiuti’s genius strikes again, with the last of the caramels in his C3 salted caramel collection: a bona fide dark chocolate caramel. 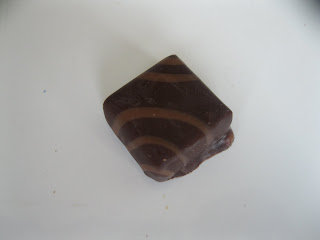 It’s obviously covered in dark chocolate, which is a bit bitter and earthy with a buttery melt. 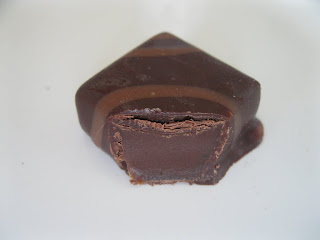 The interior, which is a bit salty, as any salted caramel should be, has a deep nutty-chocolate flavor and a distinct presence of cream. It’s similar to hot chocolate. In the form of a slightly chewy caramel. Which is covered in dark chocolate.

Have you had chocolate-flavored caramels?

Posted by Victoria at 9:53 AM 7 comments

Caramel – even salted caramel – can come across as a bit plain. I mean, how much cream, sugar, and salt can you eat.

Alright, I’ll admit it: a lot. But variety is something. And Recchiuti’s folks know that, which is why my box of C3 salted caramels included this butterscotch caramel. 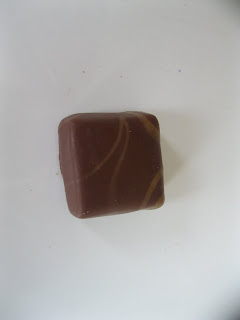 This caramel had a milk chocolate couverture, with a flavor and texture that are both creamy, and features a nutty aroma that seems somewhat salty. 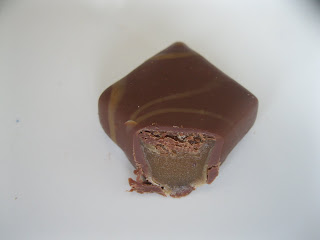 The caramel is a bit salty with a hint of butterscotch, and is fortunately not overly sweet. I’d been concerned about this piece being sickeningly sweet, with the combination of butterscotch and caramel, but was pleased to find that, while sweet, it wasn’t a sugar bomb. Rather, the creamy caramel and chocolate blend nicely with the butterscotch, and the soft milk chocolate aligns perfectly with the not-chewy-but-not-runny texture of the caramel that dissolves flawlessly.

It’s awesome. Please send me some. I’d be indebted to you forever.

Or until the caramels were gone, which would be soon.

Have you had butterscotch caramels before? What did you think?