My box of Valrhona assorted chocolates included a couple of ganaches based on specific lines of Valrhona chocolate. These ganaches were plain, without any fruit or nut add-ins, which better showcases the character of the chocolate itself. 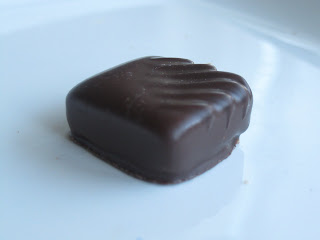 The first such ganache I tried was the Grand Cru 66% Cocoa Ganache, which had a very strong aroma. 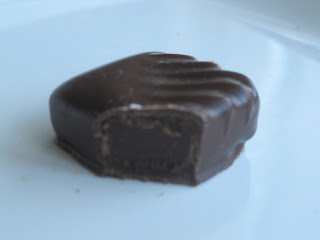 The shell broke a little bit on the first bite, and is a bit too firm for the center, but not excessively so.

The ganache is both buttery and flavorful, with distinct coffee and vanilla flavors and a hint of caramel. The flavor is intense but not overwhelmingly bitter. I enjoyed the ganache, but the texture wasn’t well-matched to the rather firm shell, and the two components separated. Still, the flavor was sufficiently complex and strong to carry the creation and make it one that I enjoyed.

Another plain ganache in the assortment was the Grand Cru Guanaja 70% Cocoa Ganache. 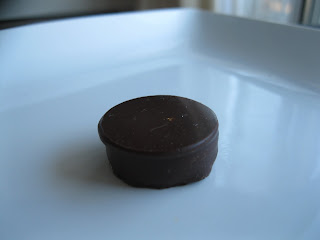 Again, the exterior was a bit too firm for the ganache, and chipped away a bit with each bite. The couverture does, however, lend the creation a nice vanilla undertone with a slight coffee aftertaste. 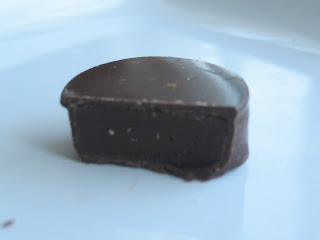 The ganache was, like the Grand Cru 66% Cocoa Ganache, quite buttery, and featured a distinct nutty flavor that balanced well against the coffee and vanilla notes in the couverture. The blend of flavors was pleasing overall.

In both of these ganaches, the character of the chocolate stood out, but I’d prefer to see a better effort to match the firmness of the couverture and the ganache to prevent flaking with each bite.

Do you like plain truffles that feature the flavor of a complex chocolate?