After sampling the Taza Chocolate 60% Cocoa Dark Chocolate Bar, I decided to up my game and the cocoa content by checking out their 70% cocoa bar. 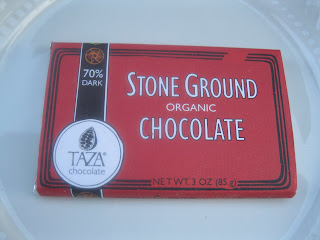 One thing I learned after posting about the 60% cocoa bar was that many bean-to-bar makers use a stone grinding process; however, what makes Taza's chocolate unique is the type of ginder they use. Courtesy of Ben over at Potomac Chocolate:

"They use a traditional Mexican molino grinder in which the cocoa mass passes between two rotating stones, while most use a stone melanger in which the chocolate is ground under stone wheels rolling on a stone base.

This picture shows the chocolate coming out of the bottom of the molino: http://bit.ly/ign1pD

This picture shows a large melanger (much, much larger than the ones I currently use): http://bit.ly/goD1qM"

So with that expert knowledge available to me, I now understand more about why Taza's chocolate has such an intriguing texture. Thanks, Ben!

Back to the bar at hand. The aroma, which is quite strong, is dominated by a woody note. 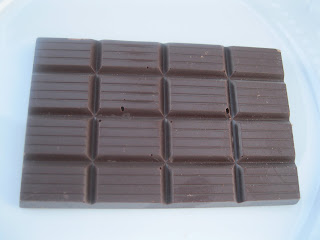 When tasting this bar, the first thing I noted was that it was a tad less gritty than the 60% cocoa bar, and that the bar was again quite soft and easy to bite into. In terms of flavor, there’s an immediate taste of vanilla, followed by woodiness that lingers long after the chocolate is gone. The chocolate flavor is strong, but there is sufficient added sugar to cut through any potential bitterness. I like this a bit more than the 60% cocoa bar, which I think might have been a little to gritty for my tastes, and will probably be purchasing more of this in the future when I have a hankering for stone-ground chocolate.

Do you take note of the aroma of chocolate before tasting it?