One very neat touch at The Chocolate Box in Seattle, which I visited during my trip last month, was the nearly overwhelming selection of chocolates from producers in the Pacific Northwest. Some, such as Moonstruck and Fran’s, were familiar to me. Others, such as Forte, based in Mount Vernon, WA, were new finds. Since I’m on a nonstop quest to find gems in the world of small-scale chocolate producers, I selected a bar of their 71% Cocoa Chocolate Brute to examine. 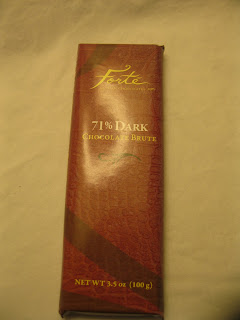 The bar has a fairly pronounced vanilla aroma, but offers little else on unwrapping. 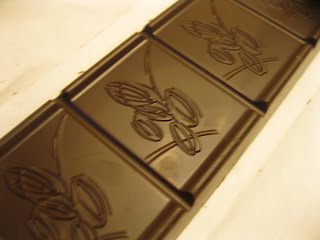 The flavor, which features coffee and vanilla, is not very assertive, but is not so subdued that it’s overwhelmed by sugar. The best feature of this chocolate is not its flavor, but rather its texture. It is exceptionally smooth, almost creamy, with a nice, slow melt. However, the texture alone doesn’t qualify this bar for outstanding status – in fact, I’d chose a trustworthy Scharffen Berger 70% cocoa bittersweet bar over this, as the Scharffen Berger has a texture that is just as good and a deeper, more complex flavor.

What flavor notes do you enjoy in dark chocolate?