Taza Vanilla: On the Sweeter Side

Fact about my bizarre family: My mom never measures vanilla. Because no matter how much she adds to whatever she is making, it’s not enough for my dad. Even after she showed him how much Tahitian vanilla extract costs per ounce, my always-frugal father simply replied that he didn’t care.

Naturally, this made me a vanilla lover. The instant the Taza Vanilla Mexicano Disc was within my field of vision as I scanned their retail store in Somerville, I grabbed several. For my chocolate cabinet. 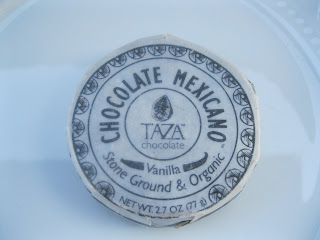 Come on, don’t you know about my chocolate cabinet by now? You should have one, too, but it won’t always stop you from eating some of your chocolate before it actually makes it into said cabinet. Trust me – this disc was one such chocolate, as I was very excited to try it since the vanilla aroma was evident even before I fully unwrapped it. 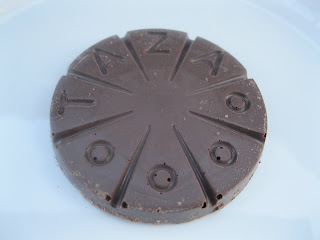 That aroma is likely the result of what seemed to be finely ground vanilla beans, which give the chocolate take on a sweeter character than the other discs, like the salt and pepper, that I’d sampled before. The chocolate isn’t completely overpowered by the vanilla, and a bit of a coffee undertone lingers after the vanilla flavor is gone. Interestingly, this disc seems not be quite as soft as the other flavors, and it has a slightly slower melt.

Overall, the chocolate isn’t all that daring, as it is simply vanilla rather than a unique combination of flavors like chili or cinnamon. But it’s well balanced and features the vanilla well, so those who like their baked goods prepared with a big slosh of vanilla will love it.

My dad might not care how much this cost, either. Hard to say.

Do you like vanilla bean bits in food? What about in chocolate?