Before I get into the details of this mint-inspired experiment, I’ve noticed that a lot of food photographers use nifty backdrops. I try sometimes, but never claim to be a great food photographer, I just like to eat chocolate, create things with chocolate, and write about chocolate. Taking pictures of the process is something I do from time to time. But maybe a backdrop once in a while would be nice. Enter my guest backdrop. 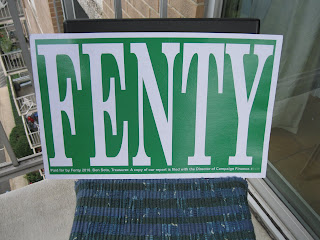 For those of you who don’t pay attention to DC politics, the DC mayoral primary is on Tuesday, September 14. Because most of the city’s residents are registered democrats, the democratic primary essentially decides who will win. Adrian Fenty, the incumbent, is running a bit behind in the most recent polls, but I’m behind him. And got this sign at one of the rallies I attended. So you’ll see this sign in a few pictures over the next week or so, and hopefully, you’ll see Fenty in office through 2013.

More importantly, you’ll continue to see chocolate. I have a project I’m working on for a friend who had a rough summer and needs a chocolate pick-me-up. She loves chocolate and mint together, so I experimented with crème de menthe ganache, checking out a white chocolate version and a milk chocolate version 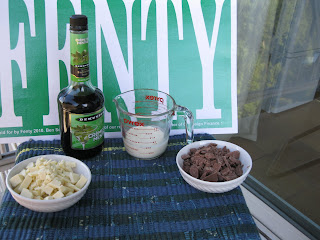 Since the idea was to try this with milk and white chocolate, I heated the cream in ¼ cup batches. When it started to simmer, I removed it from the heat and dropped one kind of chopped chocolate in and let the hot cream do the work. A few minutes later, I stirred the ganache to smooth perfection and added a tablespoon of the crème de menthe. I chilled each in the refrigerator, periodically stirring the ganache to keep it smooth. I wound up with two tasty ganaches. 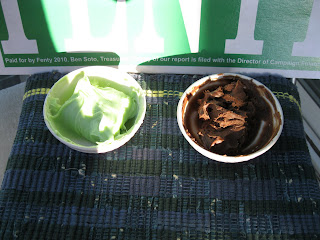 I think I like the white chocolate better for two reasons. First, the mint liquor really comes through nicely. Second, it takes on that nice subtle green hue from the crème de menthe, which psychologically enhances the mint flavor just a bit. Both are pretty tasty, though.