Fudges that aren’t chocolate-based perplex me. I associate words like “fudgy” exclusively with chocolate-based treats, and though I realize that the fudge-making process doesn’t require any chocolate, I’m still not sure what I think about non-chocolate fudge.

That doesn’t stop me from eating non-chocolate fudge, though. Non-chocolate fudge like the vanilla fudge that forms the base of this Kansas City Special fudge from Chip’s Chocolate Factory. 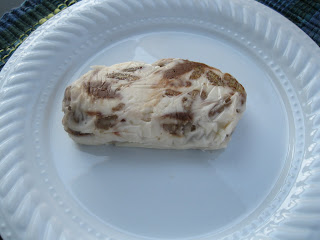 While the base is vanilla, there’s some chocolate fudge mixed in, and there are also pecans mixed in. Upon first bite, my first thought was “maple syrup.” After a few more bites and contemplation, I was sure that I tasted maple more than I tasted vanilla, though both were in play here. Also in play were soft pecans, that seem to have absorbed butter and sugar from the surrounding fudge. This made the treat easier to enjoy in a continuous, rather than crumbly, bite. There were also small bites of chocolate fudge that offered contrast to the vanilla (or maple) base, though I could personally go for a higher chocolate : vanilla ratio.

The texture of the base fudge is smooth, without any graininess, but is just a little drier than the creamy chocolate, which I shall hold as the standard for creaminess of all fudge from this day forward. The Kansas City Special is a neat blend of flavors, and in fact, after eating it, I started contemplating recipes I could make with chocolate and maple syrup. Even while contemplating the flavor mixture, I kept looking back at the remaining creamy chocolate fudge. Being a fudge flavor at Chip’s Chocolate Factory and knowing that the creamy chocolate is there must be like growing up with a high-achieving older sibling who does no wrong – it’s just impossible to be as good.