I warned you in my first post about Gomas that you’d be reading about them a lot given the full pound of chocolate they shipped me. And I told you that Goumas sent me a wide variety of turtles. But yesterday featured reviews of three turtles, and two were reviewed the day before. Surely I am done.

False. Two more remain. They are “Sea Turtles.” Because they involve salt.

The milk sea turtle was even somewhat turtle shaped. At least in my brain. 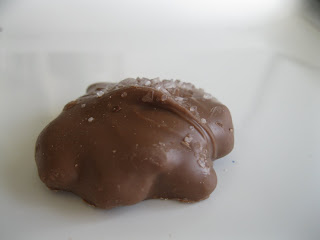 The turtle has a creamy aroma, and the chocolate exterior has a nutty flavor with a hint of creaminess. It is sweet, but the bits of salt cut back on this so that usually it isn’t overwhelmingly sweet. Unfortunately, the salt distribution isn’t very even, which results in some super-salty bites and unsalted bites. It can be difficult to enjoy the treat consistently with this construction. 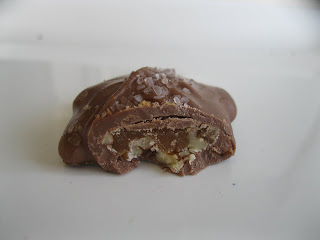 It also turns out that the interior features large walnuts, that while well-roasted, are too large to be evenly distributed throughout. It’s difficult to evaluate the caramel itself, as the walnuts take up such a large proportion of the interior, but it is quite firm and breaks away from the chocolate coating. Though I’d been excited to try yet another salt-based chocolate treat (it’s an obsession of mine), I was disappointed by the execution of this piece.

Would a dark version be better? Would a subtle coffee and vanilla aroma coming from a smooth chocolate coating featuring a strong coffee flavor, make it better? Not with poorly distributed salt. 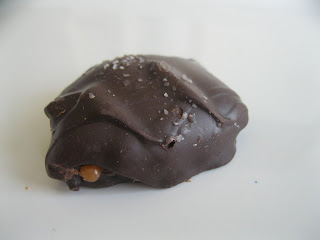 The interior was again dominated by walnuts, which, in this case, seemed to be under-roasted. On the upside, the texture of the interior and exterior allowed me to take small bites of the piece without getting chocolate all over my shirt. 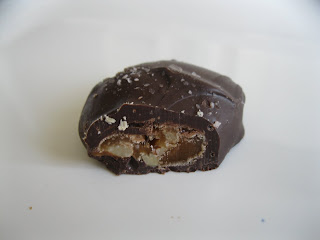 Shut up. It happens to you, too.

Do you think calling these pieces “sea turtles” is cute? Or a little much?