As I mentioned yesterday, while in San Francisco to run a meeting with a bunch of my fellow nuclear folks, we found some time to take TCHO’s factory tour. A utilitarian building along the Embarcadero awaited us. 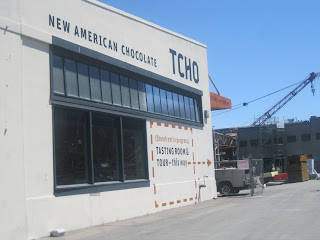 Once inside, we found a retail shop, complete with chocolate-themed decorations. 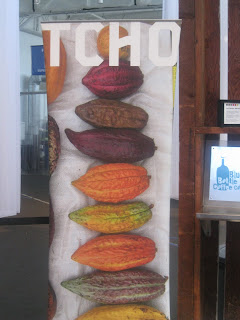 We poked around in the shop for a while, waiting for the tour to begin. Once we were all taken back for the tour, we enjoyed a video about TCHO’s founding and mission. First of all…what on earth does TCHO stand for? Well, nothing really, except that it’s a play on words – T(echnology) meets Cho(colate).

They do, in fact, take a very scientific approach to chocolate making, which is unsurprising given that co-founder Timothy Childs worked for NASA before beginning his work with TCHO, and that the current President (Jane Metcalfe) and CEO (Louis Rossetto) previously co-founded Wired magazine. This, of course, appealed to the crowd from our meeting that had assembled for the tour. Our inner (or not so inner) nerds thoroughly enjoyed hearing about the cocoa lab that they use to identify the best cacao and develop the best fermentation, roasting, and production processes.

As part of this scientifically-focused pre-tour video, we got a lesson in the anatomy of the cacao tree, pod, and fruit. 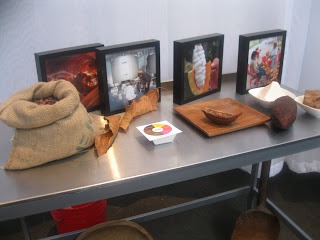 With illustration and hands-on demonstrations, of course.

Then, it was time to enter the factory. With hairnets. 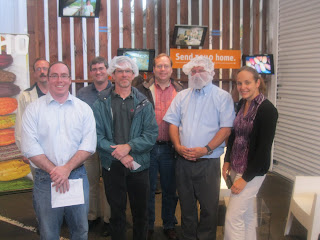 What a group we are.

While in the factory area for about 5-10 minutes, we learned a few additional tidbits about TCHO’s work:

After looking at their melangers and tempering machines, we moved onto the best portion: the chocolate tasting. Before the that started, we learned a good deal about their flavor wheel, which identifies six natural flavors of chocolate: chocolatey (?), citrus, fruity, floral, nutty, earthy. TCHO currently has bars tailored to emphasize nutty, fruity, citrus, and chocolatey flavors, and we very much enjoyed each of them.

I picked up a few of their bars in the retail shop afterwards, including this piece of 99% cacao chocolate. 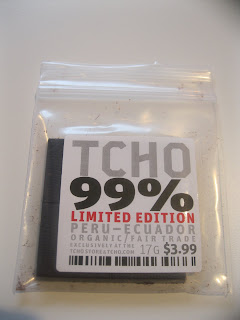 My colleagues were skeptical. I gave them bits of it. We all enjoyed it. Which is a lot to say for something that strong.

Have you ever toured a chocolate factory? Where?