So those Butterscotch Blondies with Salted Chocolate Glaze that I won in that auction that Lauren hosted to support Steve’s fundraising efforts. Nice stuff. You might say I’m lucky I won them.

What if I told you that I won something else, too? Would that be unbelievable?

Believe it. This time, I won something from the host herself. 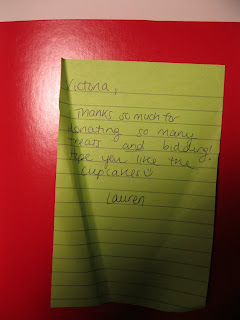 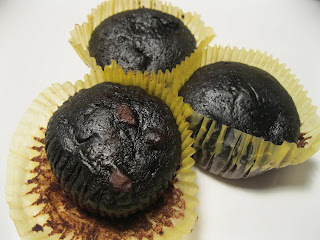 Usually, I just wrap things in aluminum foil, shove them in a box, and say “here’s your stuff.”

These cupcakes give off a pleasant fruity aroma, with a distinct banana note alongside some coffee. Now, how do these low-fat, vegan treats actually taste? 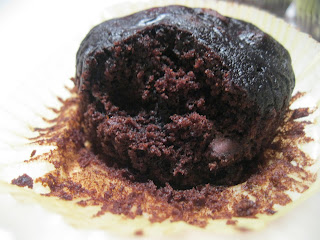 The chocolate flavor is intense. Really intense. This, of course, appeals to me, but I was concerned about texture given the vegan recipe and the lower fat approach to baking these. No need for concern. The tops are extremely gooey, and the remainder of the cupcake is dense and moist with chocolate chips that melted into the cake during the baking process to make it even gooier.

Since they’re low-fat, you can eat a dozen for breakfast. Really. And even if that isn't healthy, you'll want to anyway.

What are your thoughts on vegan baked goods – do they usually turn out when you try to make them?