When something gets suggested to you often enough, you start to think there is a cosmic force drawing you towards that concept.

Take my discussions about Max Brenner’s as an example. First, Julie visited NYC, stopped by their shop, and talked about how she wanted to move there. Not moving to NYC. Actually moving and living at Max Brenner’s.

Then, Candice suggested this is a spot we could check out when I was in Boston last week. This was a force of nature drawing me here. I stopped resisting. I told Jaryn that we must go. 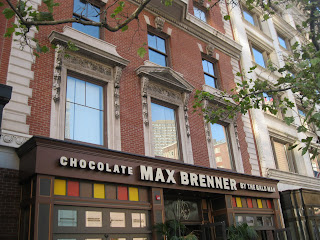 Inside, we found a good deal of chocolate-themed artwork. Neat-o. 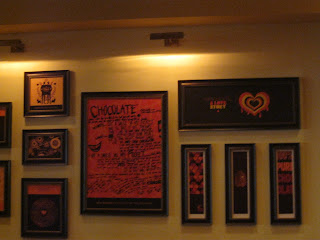 We noticed from the minute that our drinks came out that this place is all about presentation. Just looke at the Satisfaction Guaranteed Cocktail that Candice got. 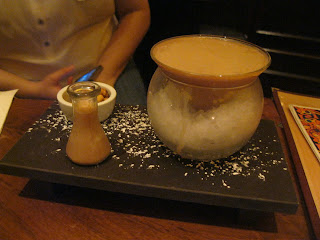 She was happy to report that not only did this blend of peanut and caramel liquors and milk chocolate look good, but it genuinely tasted like an alcoholic Snickers bar.

Even a standard drink, like Jaryn’s White Russian, gets fancied up at Max Brenner’s. 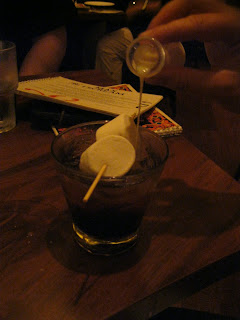 That’s some white chocolate getting poured right into her drink.

Though most of the chocolate on the menu was concentrated in the drink and desserts section, one appetizer, the onion rings with dark chocolate ranch dressing, was also chocolate-themed. 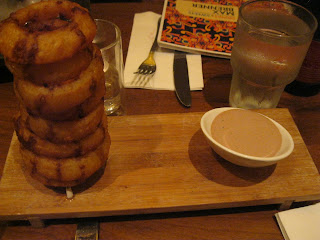 The ranch dressing featured a smoky kick from the chocolate, but wasn’t otherwise distinguishable from normal ranch dressing. The onion rings were nicely done – crispy and not too greasy. Maybe next time, I’ll ask for straight up chocolate sauce on the side, too.

Since that appetizer was light on the chocolate, we had to order dessert. Jaryn and I split the Spectacular Melting Chocolate S’mores Sundae, which included chocolate gelato, vanilla ice cream, milk chocolate and vanilla sauces, marshmallow fluff AND a toasted marshmallow. And whipped cream and chocolate chunks. Obviously. 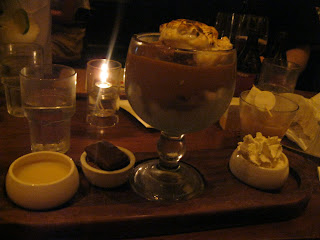 The centerpiece dark chocolate gelato was speckled with soft chocolate chunks, and had flavors of woodiness and coffee with some caramel notes. It was decadent and rich, especially alongside the creamy, buttery chocolate and vanilla sauces. This is where the vanilla ice cream came in and cut through the pure richness nicely, and the barely sweetened whipped cream balanced out the sugar to fat ratio nicely.

If you’re in Boston, stop by this place, if only to check out the presentation of the dishes and the décor. You can also go to branches is Philly and NYC.

Have you been to Max Brenner’s? Did you like it?