Yesterday, we talked a bit about Kokoleka O’Ka Aina's work in cacao farming in Oahu. Just a bit. So, why is Seneca doing this? What’s the grand plan, besides making delicious chocolate?

There are many grand, and admirable, plans. Optimization of taste and viability. Maintenance of genetic diversity. Vertical production of chocolate on Oahu. 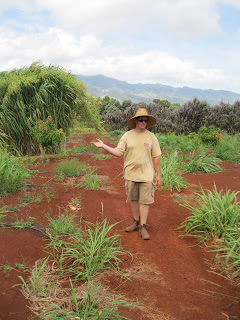 While cacao has been grown in Hawaii for a century, it has generally been viewed as a potential commodity, and the art of cacao farming has just begun taking off. With genetic diversity as one of his goals, his particular approach to artisan cacao farming, he uses mother plants from several sources, and found that those from Oahu and the big island did quite well, while those from the north coast of Kawai didn’t thrive. Though diversity is key to his vision, Seneca did note that yield versus diversity is a constant battle, as homogonous crops can be bred to survive specific conditions, however, this leaves the crop susceptible to near elimination under abnormal conditions.

Once those trees start producing fruit, this is what the pods look like. 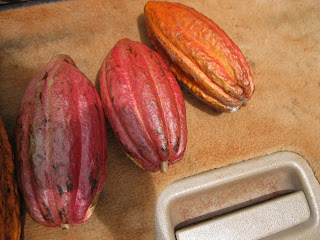 Pretty, aren’t they? Now look inside. 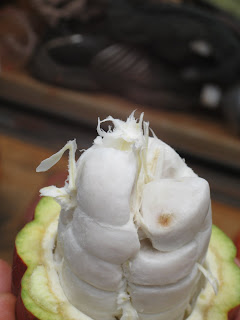 That white pulp you see is the fruit of the pod. The center of each of those little pieces is what actually goes into your chocolate, though. 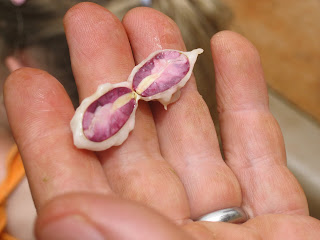 That doesn’t mean you can’t eat the fruit. And if somebody as kind as Seneca ever offers to let you try the fruit, I highly suggest doing so. It’s a juicy, tart, fruity pulp, and you’ll be unlikely to have the experience again.

Eventually, Seneca is interested in vertical production of chocolate using ingredients sourced entirely from the area of his farm. Hawaii is one of the few places on the planet that could support this, as the infrastructure, population, and tourism can support chocolate making while the land can support cacao farming.

Now that would be outstanding. Bean-to-bar chocolate making is impressive. Soil to bar would be truly remarkable. I’m excited to watch this happen.

What do you think about vertical chocolate production?