Biagio Sample Day: Running Into People Who Read Your Blog

Ah, Monday. The beginning of another week, holding so much promise. Don’t you love Mondays?

Or, maybe now, you hate me. Whatever. You know what would make you hate me more? If you read about the chocolate tasting event that I went to this weekend. 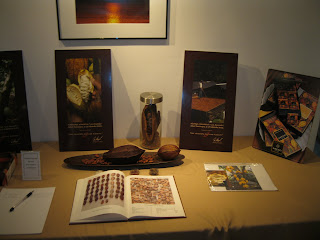 It was the regular monthly chocolate tasting at Biagio, and was the first one conducted by the new owner, Robert Cabeca. To welcome the new ownership, as well as the late-May heat wave, there was iced hot chocolate (?) available. 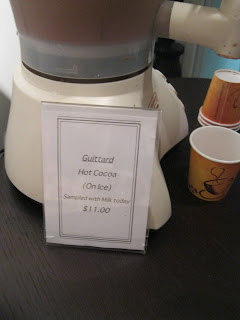 This drink, which was made with E. Guittard drinking cocoa, was intense but a tad thin. It seemed that the cocoa wasn’t very well miscible with water. I quickly moved along to the main attraction: the chocolate, which included the Michel Cluizel 67% Cocoa Los Ancones single plantation chocolate, which featured a buttery melt with an earthy flavor and just a hint of sugar. 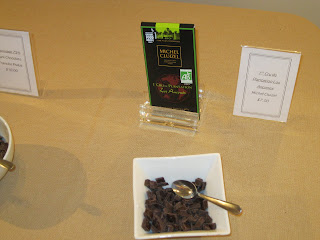 Now, you may wonder how I recall such specific chocolate characteristics after a tasting event. I wish I could say that it’s because I’m just that brilliant, but it’s actually because I take notes. Another woman noted that this was a good idea, and I explained that I did this for my chocolate blog.

“What blog do you write? I think I follow you.”

Yep. It was Rachel, a brilliant guru on agricultural sustainability, who writes at My Munchable Musings. We chatted after the tasting about cocoa-growing regions (she adores Madagascan chocolate), dilemmas of quinoa farmers in Bolivia, and food distribution in general.

But first, we sampled more chocolate, including:

I decided to pick up a few items I’d had on my mind, including the Amano Chuao Reserve, which I’d seen Candice review earlier this year, the Madacasse milk chocolate, which Lee gave good reviews to, and the Recchiuti Asphalt Jungle Mix, that David Lebovitz himself found addicting. 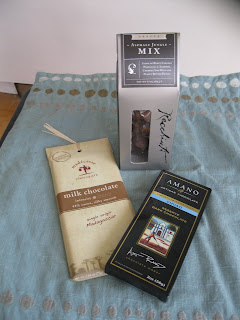 I also picked up two items that were out for tasting at the sample day, including the previously mentioned Cluizel bar; I also threw in a Domori Puertomar that I’d found enjoyable. 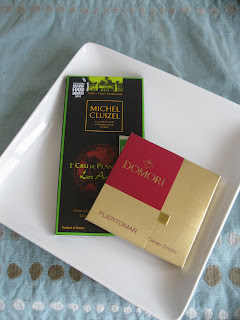 Another wonderful sample day – this one enhanced by a serendipitous meet up with a fellow blogger.