That package I received from Heather last week had two stone-ground chocolate bars from Nashville, and I only discussed the 75% cocoa dark chocolate bar in my first post about the package. Truthfully, I was even more excited about the second Olive & Sinclair bar, the Mexican Style Cinn-Chili bar, but when trying out a new chocolatier, I like to sample a plain chocolate first to get a better sense of what they are all about before I dive into the more exotic creations. Having accomplished that by trying the 75% cocoa dark chocolate bar, I moved along to the Mexican Style Cinn-Chili bar. 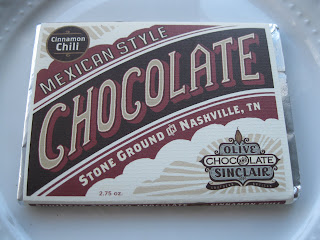 Again, the aroma isn’t very strong – not even from the cinnamon or chili – so I had to bite into it to find out more. 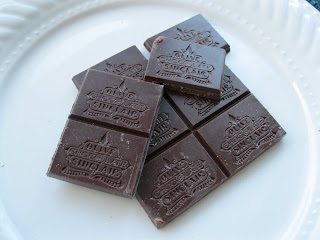 My impressions of this chocolate came in four stages. First, the chocolate is soft with a little grit to it, and that unique texture leads to the second stage of taste-testing: the cinnamon. As the soft chocolate melts away, the chili starts to come through as the third stage. The fourth stage comes several seconds later, when I tried to determine what the chocolate itself tasted like. After several bites of this 67% cocoa bar, I was convinced that it was more about the add-in flavors than the chocolate flavor, and that the chocolate quality was most evident through the texture. Since I adore cinnamon and chili in chocolate, I enjoyed the spiciness despite the fact that it overwhelmed the chocolate flavor. I would certainly get this bar again, but more for the cinnamon and chili mixed with the high-quality cocoa butter than for the chocolate itself.