It's Election Day. In most of the U.S., this is a big deal. For DC residents, the general election is a non-event because the winner of the Democratic primary almost always wins the general election. I spent a lot of time researching independent and third-party candidates, and found some who I will vote for in vain. In other cases, I'm simply casting a write in vote.

If I could, I would vote for whoever developed the concept of mixing chocolate with cream, hazelnut paste, and sugar. I would do this because gianduja is such a wonderful creation that I can eat by the pound, and I would love to simultaneously thank them for the immense enjoyment I’ve gotten from this and berate them for the number of times I’ve been unable to eat a proper dinner because of gianduja overindulgence. It was therefore quite fortunate that this bar was part of the Vosges library that I picked up. 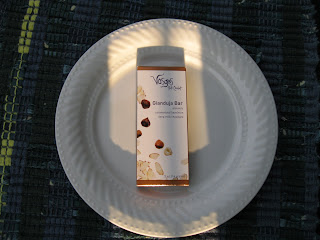 Not only was this bar filled with one of my favorite approaches to mixing chocolate and nuts, but it had a nice message for me before I devoured it. 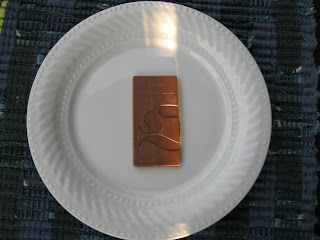 Never lovelier? Aw, thanks chocolate bar that I’m about to eat every last crumb of!

The deep milk chocolate in this bar seems even sweeter and creamier than that in other bars. It is very, very soft, similar to the chocolate coating the Vosges toffee, and the melt-in-your-mouth factor is off the charts. Joined with that softness is a bit of a nutty crunch, and it seems that there were finely ground hazelnuts added in to boost the fat content and make the bar even smoother. I swear there’s even extra cream incorporated, and the entire bar is like the center of a high-quality praline or truffle. Even though I’m partial to giandujas, I think that I can objectively say that this bar is an exceptional one that would be worth anybody’s money. I know that I’ll certainly be spending more of mine on it the next time I find one. I call it "voting with your pocketbook."

The rest of you, though, should vote for real.