When I pored over the recipe packet at Nick Malgeri’s demonstration, I spotted one for truffle brownies, which looked awfully similar to the supernatural brownie recipe that I adore so much. Evidently, he has some business venture in the works that will prevent him from using that title anymore, so instead, we now have truffle brownies, which have more brown sugar in them. 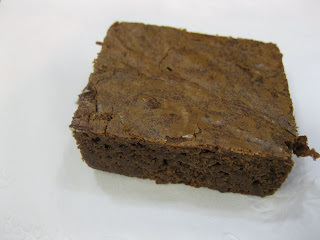 The very simple recipe is available in Bake!, which I’ve been enjoying immensely. A few extra tips that Nick passed along while whipping these up:

-The light brown sugar is key for keeping the moisture level right. Don’t replace it with granulated or dark brown sugars.

-The brownies will turn out fudgy. Nick noted that this is how brownies should be, and that anybody who likes cakey brownies, “well, they have my condolences.”

- He now mixes the flour in with the sugar rather than at the end to avoid clumping of flour. As such, it is important to avoid overmixing after adding the eggs.

- An easy way to accurately line a pan with foil is to turn it over, fit the foil to the outside, and then use that as a rough mold for the inside. There will be very small crinkles in the corners because the inside is smaller, but buttering the foil will make that a non-issue.

- Don't cut these until they are cooled. To facilitate this during our demo, Nick put these in the freezer before cutting them up for us to enjoy. 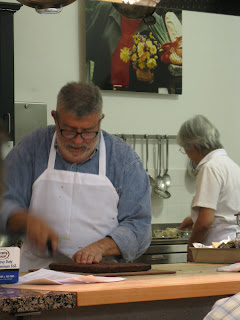 Final product: The chocolate flavor isn’t that intense, and there is a strong caramel note from all that brown sugar. Texture-wise, it is dense and moist, just like the supernatural brownie. I’ll have to try it at home with my standby chocolate to see if I can coax more chocolate flavor out of this recipe.