Although the frozen yogurt may be what personally draws me to JP Licks, others are more impressed by their more decadent treats, like these ice cream cakes prominently displayed at the entrance. 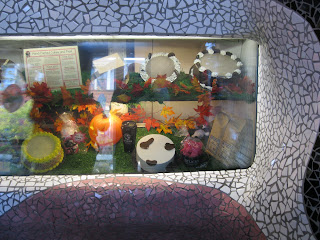 Others are content with the ice cream itself. The friend who humored me at Teuscher and Hotel Chocolat was also with me for the JP Licks visit, and was uninterested in the frozen yogurt. She instead selected two ice cream flavors to sample: El Diablo and Mint Chocolate Lace. 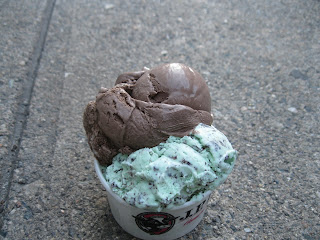 The El Diablo, which she was kind enough to share with me, was chocolate based with cinnamon and cayenne pepper added in. She noted that the cayenne was more noticeable than the cinnamon, and stuck around far longer as part of the aftertaste. She shared some with me, and while I did detect a spicy cinnamon note, I agreed that the cayenne flavor stuck around longer. Both spices were complimentary to a creamy, well-balanced dark chocolate flavor. Clearly a winner all-around.

The Mint Chocolate Lace was a mint-based ice cream with ribbons of chocolate incorporated. In this ice cream, which my friend also generously let me sample, the mint base is far more prominent than the chocolate, and there is a strong mint aftertaste. The chocolate flavor is subtly delivered via small flecks of chocolate that crunch just a tad and then melt in your mouth. It was a nice, cool compliment to the fiery El Diablo flavor. Though the ice cream was richer than the frozen yogurt I got for myself, nostalgia will always lead me to select the frozen yogurt.

And then steal tastes of the ice cream from my friends. It works, OK?