Having looked over my copy of Nick Malgieri’s Chocolate several times since receiving it as a gift eight years ago, I knew that he has several recipes for seriously impressive desserts in his arsenal. He made one of these, a chocolate and coffee walnut cake, during the demonstration I went to. 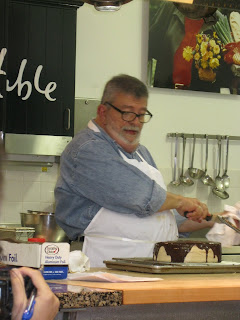 Let’s be serious: That picture is of him pouring ganache on top of a cake that is already covered and filled with coffee buttercream. This is a cake that means business, and Nick gave us a few tips to help us along should we dare to attempt it ourselves.

For the cake layers:

-When whipping egg whites for a meringue base, get the eggs foamy before starting to add the sugor, or else the sugar melts and the mixture gets sticky.

-If using a stand mixer to make a meringue base for cake batter, medium speed is best.

-Avoid mixing the flour and nuts before folding into the meringue mixture. Doing so will cause the flour to cling to the nuts and prevent the cake from rising properly

-To prevent doming of the cake, bake in a pan taller than needed so that the cake rises along the edges during the entire baking process.

For the meringue buttercream.

-Use the whisk attachment to make the meringue, but switch to the paddle attachment when incorporating the butter

-Be careful when adding any liquid, such as extracts. Go very slowly, or the buttercream may permanently separate.

For assembling the cake:

-When cutting the cake layer, cut a ½-1” line around the circumference of the cake, and then slice all the way through.

-Keep one end of the spatula completely in the buttercream only. This prevents crumb tracking.

-To smooth the top, track the spatula in from the outside edges. 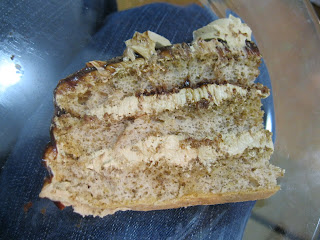 Final product: The nuts give the cake a satisfying but not overwhelming crunch that contrasts well with the fluffy buttercream. The coffee flavor is distinct but not overpowering, and the buttercream has a pleasing level of sweetness. There’s just a bit of chocolate here in the ganache, and it really pulls the whole thing together into a wonderful masterpiece.