As sad as it was to be leaving Hawaii yesterday, it’s not like the rest of the United States is all that bad. There are some really great places all over the country. I’m not quite ready to admit that I’m going all the way back to the east coast yet, so let’s ease ourselves back into mainland mode by starting off with some chocolate made on the west coast. Moonstruck, based in Portland, Oregon, put out this 74% cocoa bar made from Venezuelan beans. 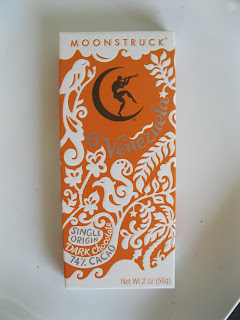 As a long-time devotee to Venezuelan chocolate, with El Rey being my first introduction to such wonderful treats, my ears always perk up when I hear it mentioned, as Venezuelan beans are regarded as some of the best in the world. I was hopeful that Moonstruck had handled the beans well, and unwrapped the bar to find a faint aroma of citrus and cherry. 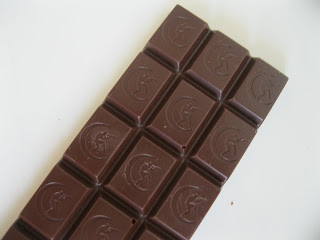 The bar started off with a dry melt that developed into something grainy and never recovered. The texture was so off-putting that it was nearly impossible to appreciate the flavors, but I did not some cherry, a little bit of citrus, and a tiny bit of coffee, with some banana developing near the end. None of these flavors are strong, and the bar lacks intensity.

Disappointment all around, especially given the Venezuelan origin touted. Definitely the lowest-quality Venezuelan bar I’ve ever had.

Have you have Venezuelan-origin chocolate that was sub-par? Who made it?