As I’d mentioned in yesterday’s little recap of that wonderful open water race, we got Hawaiian chocolate by Waialua at the finish line. But I didn’t talk about how cool that chocolate was. Single origin chocolate made by Derek Lanter himself. 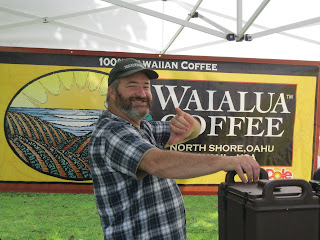 This guy is pretty cool. We chatted about Hawaiian cocoa, various Hawaiian-based chocolate makers, and characteristics about beans from various regions throughout the world. He knows his stuff. Really.

And how does he do making chocolate? I scored an extra bar to facilitate a thorough review of this 70% cocoa chocolate made exclusively with beans grown on the north shore of Oahu, just miles from the swim race. 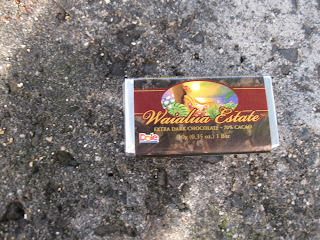 The bar has aromas of cherry, banana and coffee. Complex. 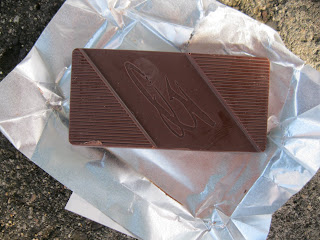 The flavor develops a bit slowly, and mirrors the aroma – the banana develops first, there is then a hint of coffee-centric bitterness, and then some mild woodiness. There is a bit of sugar added, which allows the chocolate to remain somewhat assertive without being overwhelming. The melt is generally buttery, but there is a bit of grain in the middle, though it’s not severe.

Overall, a nice bar from Hawaii; the graininess is really the only drawback. It’s a nice mild chocolate that still allows complexity to shine.

If only Hawaiian chocolate were more widely available on the mainland. And if only it were handed to me each time I completed a swim workout.

Have you ever talked shop with a chocolate maker? What did you discuss?