Today is one of my last days here in Hawaii. I’m growing sad about this, even more so as I finally realized that tomorrow is my last day here. To add to this sad state of affairs, I only have one more Madre Chocolate bar to discuss here: the Pink Peppercorn with Smoked Salt. 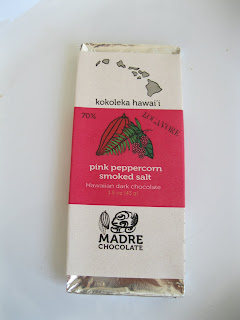 This bar, like the Passion Fruit bar, is an all-Hawaiian affair. Hamakua coast beans. Pink peppercorn from the big island. Even the smoked sea salt is from Hawaii. 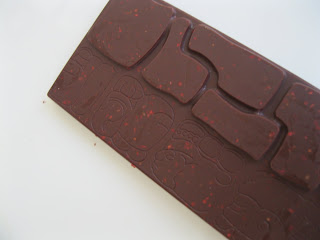 Though the peppercorns are visually evident from the front of the bar, they are even more apparent from the back. It is therefore not too surprising that a peppery aroma emerges from the bar; some fruitiness – specifically a raisin-like aroma – comes forth as well. 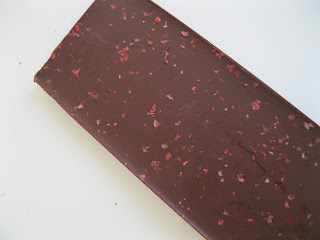 The pepper taste is immediately apparent, and is nicely muted just a bit by the coolness of a minty flavor from the chocolate. The salt, which doesn’t come through until a bit later, is well-incorporated throughout the chocolate, while the peppercorn is more coarsely ground, which is a bit difficult to reconcile with the very buttery melt of the chocolate. Though the peppercorn intrudes on the texture and flavor of the chocolate a bit, there are some other chocolate flavors apparent – notably raisins and some lemon-centric citrus. I personally found the pepper to be a bit overwhelming, but the base chocolate was clearly well cared for.

Now, if you are like me and appreciate well-cared for chocolate like that made by the folks at Madre, you can check out their kickstarter campaign to support them. Neat, isn't it?

Have you had salt or pepper from Hawaii before? In chocolate? And how sad is it that I have to leave Hawaii?