About a year ago, in one of my first posts, I wrote about the Valrhona Chocolate Amargo gelato that I’d enjoyed at the Georgetown location of Dolcezza, a DC-area gelato shop. It was (and is) good stuff. When Sarah said she had a gelato craving, I jumped at the opportunity to meet up with her at the Dupont Circle location. 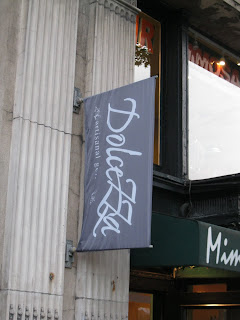 This location is quite a bit different from the Georgetown one – a little darker on the decorating, and the gelato is in covered metal tubs instead of an inviting display case. But there is a really neat display board of the available flavors. 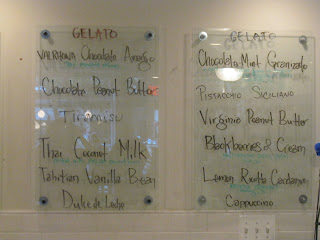 Tempting as it was to go with my fallback Valrhona Chocolate Amargo, I decided to be adventurous. After all, I was there to hear about Sarah’s major life plans, which may or may not involve taking over the world (she’s one spunky young woman who could do it if she wanted).

Which would be the best choice for a backdrop for a discussion on upcoming world domination? Chocolate Peanut Butter? Or Chocolate Mint Granizadao? After sampling both, I knew it was the latter. 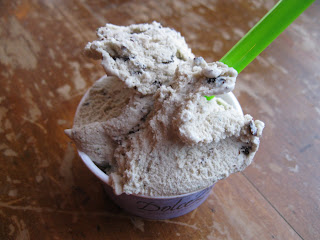 This gelato has a strong spearmint flavor, that is fresh and, unsurprisingly, refreshing on a warm summer evening. There isn’t much chocolate here, just a bit of a light ganache woven through, and the mint flavor is dominant. I found the gelato to be thinner than my standby Valrhona gelato, and it was more watery than creamy. It was nicely flavored, but it didn’t take the place of my beloved Valrhona-based gelato.

Which I’ll be getting again.