In case you live in a media vacuum, which is highly unlikely given that the fact that you are reading this post indicates that you almost certainly have internet access, you probably know that it has been hot on the east coast of the U.S. In DC, we’ve been seeing heat indexes that push 120° F. So what to do this weekend, besides bike 50 miles outdoors (and then obviously swim 5000 meters and pool run 5 miles before going to a chocolate tasting)?

Yes, bake during a record-breaking heatwave, because today is the big reveal date for the July Daring Bakers, which involved a challenge from DC’s very own Jana of Cherry Tea Cakes, who was our July Daring Baker’s host; she challenged us to make Fresh Frasiers inspired by recipes written by Elisabeth M. Prueitt and Chad Robertson in the beautiful cookbook Tartine.

Before I get into this, I’ll just say that I turned Jana’s recipe upside-down because…I felt like it. I made mini frasiers! 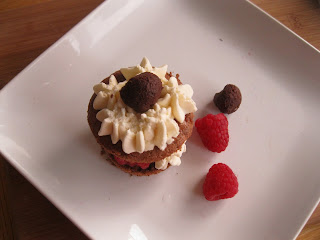 I started out with the chocolate chiffon cake, which I made cupcake size instead of the 8-inch cake size like Jana actually wanted us to make. We’re still cool, right Jana?

Line the bottom of six cavities of a cupcake pan with parchment paper. You can just trace the cavities onto parchment paper and cut them out. Easy, but necessary. Prying chiffon cake out of cupcake cavities is not a fun weekend activity. 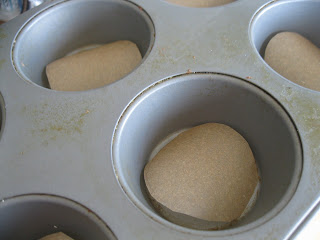 Stir together the flour, cocoa powder and baking powder. Add in all but 1 1/2 tablespoons of sugar the, and all of the salt. Stir to combine. In a small bow, whisk the oil, egg yolks, water and vanilla. Combine with the dry ingredients and mix thoroughly.

Pour the batter into the prepared cupcake cavities. 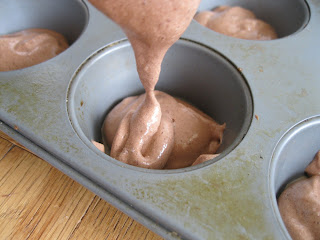 Bake at 325° F for about 20 minutes; allow to cool. To unmold, run a knife around the sides to loosen the cake from the cavities and remove; peel off parchment paper and slice each cake in half horizontally.

THEN start making some rich pastry cream. This doesn’t involve the oven, but does involve time over a hot stove while triple-digit temperatures lurk outside.

Pour the milk, vanilla, and salt into a heavy sauce pan. Place over medium-high heat and scald, bringing it to a near boiling point. Stir occasionally. Meanwhile, in a stand mixer add the cornstarch and sugar. Whisk to combine Add the eggs to the sugar and cornstarch and whisk until smooth. When the milk is ready, gently and slowly while the stand mixer is whisking, pour the heated milk down the side of the bowl into the egg mixture. Pour the mixture back into the warm pot and continue to cook over a medium heat until the custard is thick, just about to boil and coats the back of a spoon. Remove from heat and pass through a fine mesh sieve into a large mixing bowl. Allow to cool for ten minutes stirring occasionally.

Cut the butter into four pieces and whisk into the pastry cream a piece at a time until smooth. Cover the cream with plastic wrap, pressing the plastic wrap onto the top of the cream to prevent a skin from forming. Chill.

In a small dish, sprinkle the gelatin over the water and let stand for a few minutes to soften. Put two inches of water into a small sauce pan and bring to a simmer over a medium heat. Measure 2 tablespoons of the chilled pastry cream into a small stainless steel bowl that will sit across the sauce pan with the simmering water, without touching the water. Heat the cream until it is 120° F. Add the gelatin and whisk until smooth. Remove from the water bath, and whisk the remaining cold pastry cream in to incorporate in two batches. Finally, whip the cream until it holds medium-stiff peaks; immediately fold the whipped cream into the pastry cream with a rubber spatula. 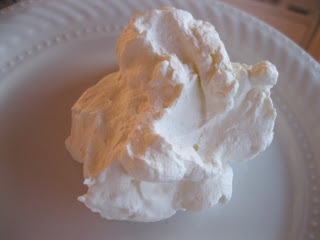 Now, we just have to pull together a few more things. First, some ganache balls by mixing an ounce of bittersweet chocolate and an ounce of cream together over low heat, and chill until firm enough to shape into falls. Next, some simple syrup – just heat 3 tablespoons of water and 3 tablespoons of white sugar until the mixture just reaches a boil. And then, pull out about a pint of raspberries. 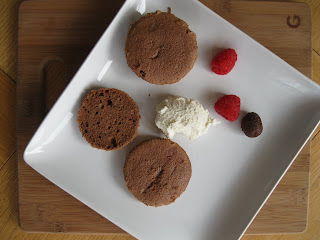 Nice spread, isn’t it? To make sense of it, take one piece of a mini-cake. Brush with simple syrup and evenly space three raspberries atop the cake. 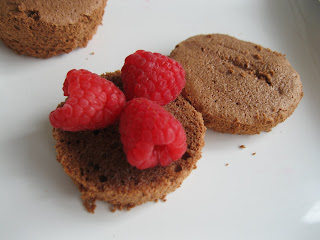 Pipe pastry cream in between the raspberries. Make sure it looks pretty. 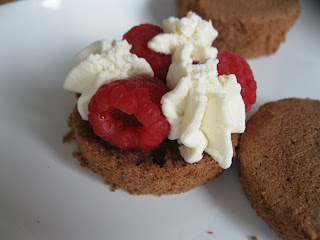 Make it look pretty enough to slap the other half of the mini cake on top. Brush that layer with simple syrup, pipe pastry cream atop the whole assembly, and then top it with a ganache ball. 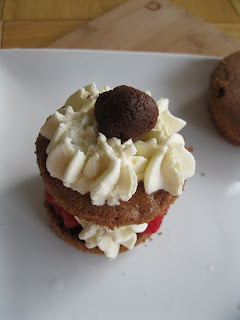 The end result is beautiful. And delicious. Even if it’s not quite what Jana wanted us to do. 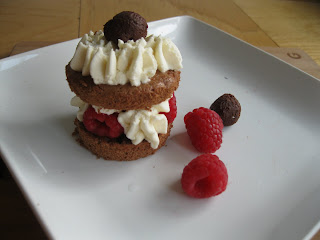 If you’re upset, Jana, I’ll make up for it by giving you one of these. But really, aren’t they just the cutest?

When was the last time you turned a recipe upside-down?