If you’re really observant (you are, aren’t you?), you likely noticed that there were two truffles left out of the discussion of the Vosges Exotic Truffle Collection yesterday. Lucky for you, we’re talking about the remaining Vosges exotic pieces today. First up, something really exotic: the black pearl, complete with sesame seeds and WASABI. 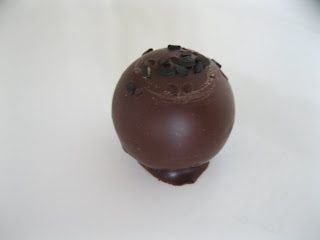 Oddly, with all that wasabi and sesame, the piece smells like caramel. Though not adding aroma, the sesame seeds do add a decorative interest and a bit of crunch, though very little flavor. 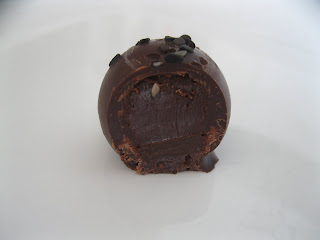 The interior features a butter texture and a uniform taste of wasabi throughout the melt, such that the flavor is spicy but not overwhelming. This allows the earthy flavor of the couverture, which also has some hints of banana, to shine through alongside the wasabi. This is obviously a very different truffle, but it’s also a very good truffle.

One more truffle remained in the box: a paprika-dusted Budapest truffle. 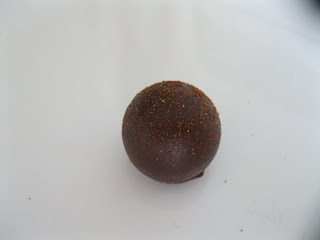 Given that dusting, it’s not surprising that the aroma was spicy, and perhaps also featured a hint of vanilla. 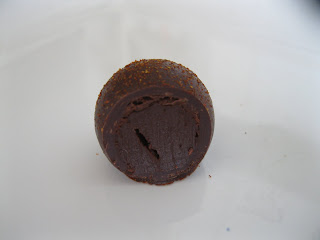 Despite the intense spicy aroma, the paprika was not very strong and dissipated almost immediately, leaving the nutty and fig flavors of the couverture behind to carry the flavor. The interior has a generic caramel flavor, and while the truffle was nice, it resembled a plain truffle more than a creative Vosges piece worth of the title “exotic.”

Have you ever had a flavored truffle that wound up tasting plain?