While I didn’t really discuss it earlier this week, Divine and Green & Black’s are alike not only because they are based in the U.K., but also because they are committed to sourcing cacao in a manner that supports the farmers and those most closely associated with the farming process, with each producing several fair trade bars. Such considerations are important to many chocolate consumers and producers alike; one such producer is Madecasse. They are passionate about supporting sustainable cacao production and working closely with cacao farmers; they specifically work closely with the Ezaka Cooperative in Madagascar. Not content to merely produce plain single-origin bar, the folks at Madecasse put together an intriguing bar that had several additional highlights: a 63% cacao sea salt and nib bar. 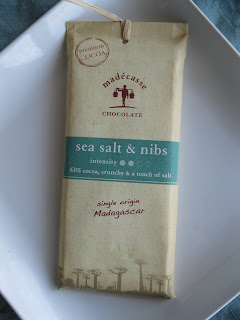 The bar has a pleasing cherry aroma with a hint of spice, and the nibs are finely ground, relatively soft, and easy to chew. The addition of the salt, while not notable in the bar’s flavor, is key to cutting through the bitterness of the nibs and making them more enjoyable. 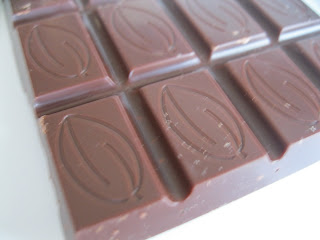 The chocolate itself has a smooth melt with a late-emerging cherry flavor that compliments the nibs nicely. The slow melt nicely compliments the finely ground nibs, such that one is not left with a mouthful of large nibs as the chocolate dissipates, a flaw in many nib bars. Overall, the combination of salt and nibs in a dark chocolate bar makes for a subdued presentation of intense cacao nibs, and is a brilliant approach by Madecasse.

Have you ever had chocolate with cacao nibs and salt?