With fall coming into town last week, I predict lots of cinnamon-enhanced treats emerging over the next few weeks. Since I stock cinnamon by the pound (really), this appeals to me. It’s also why, when I purchased that Belgian Biscuit bar by NewTree, I also picked up NewTree’s Cinnamon bar, which is “rich in soy isoflavones to maintain balance and well-being in women.” 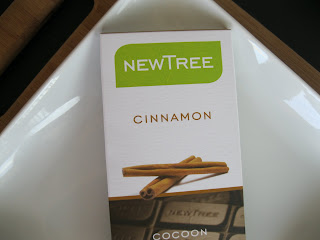 By “balance,” I hope they mean that by eating this bar, I will be less prone to twisting my ankle, running into corners of tables, or dropping everything I pick up.

Probably not. Either way, this 33% cocoa milk chocolate bar certainly has a cinnamon aroma which is complimented by a hint of caramel. 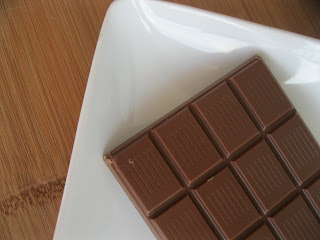 The cinnamon flavor is evident immediately, and a taste of nutmeg also emerges. A hint of cream flavor makes the bar taste a bit like chai, and other chocolate flavors are difficult to tease out. Though the chocolate is generally rich and creamy, there is a bit of grit near the end of the melt. The bar is more spice-centric than chocolate centric; if you enjoy these specific spices, you’ll like this bar, but don’t go after complex chocolate flavors. They’re not there.

How do you feel about cinnamon and chocolate together?