Though the gift of Dutch chocolate from Puccini Bomboni that I received from one of my swimmers included baking chocolate that I (possibly inappropriately) ate straight, it also included some miniature chocolate balls that were actually meant to be eaten. 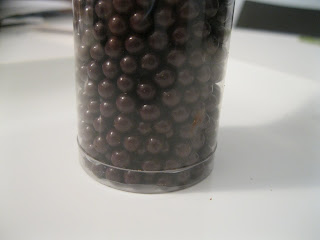 Or spilled on your kitchen floor, leaving you with a 10-minute adventure of pulling them out of every tiny corner of your kitchen and dining room.

I remain unsure of which one is the intended purpose. I did both. The nice thing about the miniature bits of chocolate is that it made it easier to assess their character by eating several. 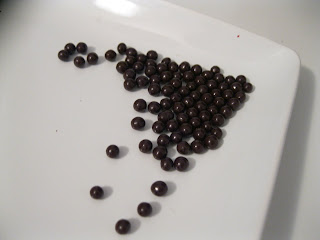 In that way, they’re similar to M&Ms, but unlike M&Ms, there isn’t a hard candy shell, and the chocolate melts smoothly and nicely. The outside of each bit is a bit waxy, which seems to be deliberate, as this prevents the chocolate from melting into one chunk. The taste of the chocolate itself, while superior to that in M&Ms, is somewhat intense, but lacks complexity with coffee and vanilla dominating the standard flavor. They’re pretty good, and a nice treat for snacking, but not anything notable.

Do you like chocolate presented in very small pieces?