Hot Blondies Bakery: The End of the Box

Having found the best brownie ever, the s’mores brunette, in the box that Hot Blondies Bakery sent me, I nearly couldn’t face the last two bars in the box. It simply wasn’t fair to evaluate them after experiencing brownie nirvana.

I contemplated building a device that would transform the last two bars into s’mores brunettes to spare them this pain, but then realized it would probably be less expensive and faster to simply order more s’mores brunettes from Hot Blondies Bakery.

In the meantime, I settled on giving the oatmeal raisin blondie a shot. 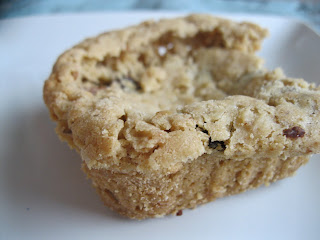 The component ingredients, namely the nuts and raisins, are high-quality and well-treated. The raisins are big and juicy, and well-distributed throughout; the nuts are well-roasted, flavorful, and crispy, not falling victim to the soggy syndrome that some nuts suffer in dense baked goods. The blondie itself tastes like oatmeal cookie dough, with notable oatmeal, cinnamon, and vanilla flavors. With all these great flavors, I was a little disappointed by the drier, crumbly sides that made it difficult to get to the delicious center. While this bar was flavorful, if I hand-selected a box, I think that other blondies, such as the butterscotch white chocolate blondie and the classic blondie, are better bets.

Or not. As if that s’mores brunette lasted long in my presence. Ha. I checked out the nutella hazelnut brunette to see if it could measure up. 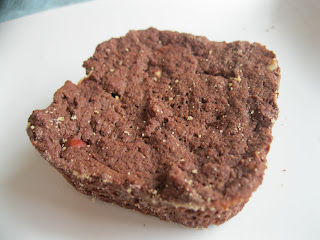 The chocolate flavor in this bar isn’t nearly as intense as that in the s’mores brunette; instead, a strong hazelnut flavor and a subtle dairy flavor are more apparent. The hazelnuts scattered throughout the bar are nice and crunchy, further enhancing the hazelnut flavor of the bar. The texture, though not as gooey and dense as the classic brunette or s’mores brunette, was a pleasing compromise between cakey and fudgy. Though I did enjoy the strong hazelnut flavor, I’d like a stronger chocolate flavor to come through with it. I enjoyed this take on the brunette, but it didn’t quite measure up to the mind-blowing taste and texture of the s’mores brunette.

Nothing does. Let’s just accept that and move on. And dive into a box of a dozen or two s’mores brunettes. I highly recommend it.