Before I left for my meeting in Atlanta, where I passed along chocolate chunk banana bread and got soaked trying to find chocolate, I had an exciting weekend visitor. 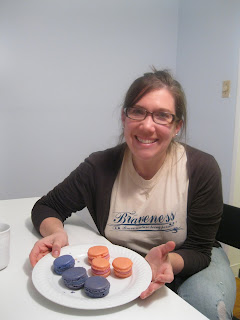 My friend Leigh was in DC all the way from Frankfurt! And she spent some of her very limited time in DC with me. How lucky was I?

Even luckier: She brought me German chocolate and a cute Christmas card. 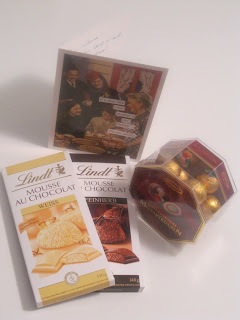 Now wouldn’t it be just totally embarrassing if I didn’t have something for her, too? Luckily, I’ve become obsessed with making macarons ever since the Macaron Monday challenge issued by Julie, Evan, and Heather, and I had a batch filled with raspberry-goat cheese buttercream waiting patiently in the freezer. 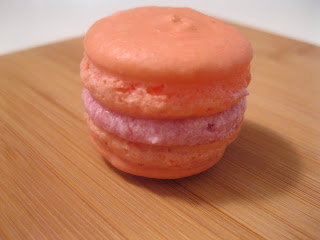 Since my last stab at macarons involved shells that were heavy on the chocolate flavor, I used a slightly different recipe for plain macaron shells, which I found from Helene’s site and converted to measures rather than mass because I still lack a kitchen scale. And these also turned out to be perfect for the MacTweets Savory Sweet Holiday Macs Mac Attack Challenge.

Ingredients for Shells (as adapted from Tartlette)

I started by blending the powdered sugar and almond flour in my food processor, being careful to arrive at a finer mixture than I did last time. I was determined to get smooth tops and perfect feet this time. 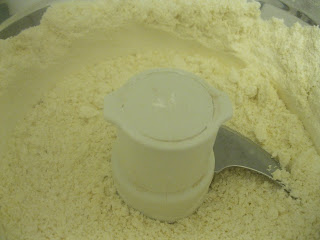 In the interest of getting perfect feet, I also whipped up the meringue a little more than last time, as I realize in retrospect that the meringue I made during that attempt wasn’t quite the consistency of shaving cream. I whipped the eggs until foamy, then continued whipping while slowly adding the granulated sugar, and finally added a few drops of red food coloring at the very end of the process. 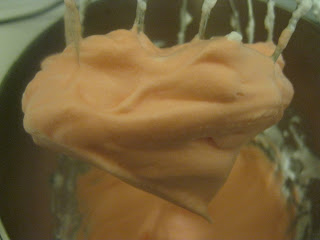 Nice firm, but not dry, meringue to work with. After carefully folding the meringues and almond-powdered sugar mixture in fewer than 50 strokes, taking care to scrape the bottom of the bowl on the strokes, I piped the mixture in rounds about 1 ½” in diameter on a baking sheet lined with parchment paper. 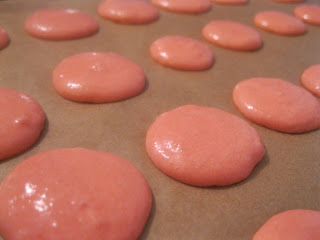 I let them sit for 45 minutes, determined to let a skin develop so that I would get that foot on each shell. Jessica over at Bake Me Away may call this a foot fetish that macaron makers all seem to develop, but I sadly think I’ve also caught that bug. After giving the unbaked shells time to develop that skin, I put them in the oven, which I’d pre-heated to 280° F, for 20 minutes, and crossed my fingers. 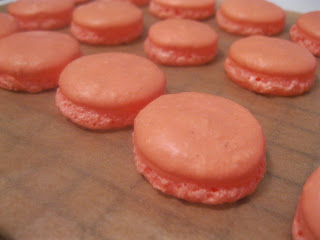 After a bit of a happy dance (it’s acceptable, I live by myself), I moved along to making the filling, which was loosely based on the old-fashioned buttercream recipe I learned from my mother decades ago.

I began by taking the softened butter and goat cheese and whipping them with the whisk attachment to my stand mixer, which I ran at high speed, for about five minutes, until they were quite fluffy. Then I continued whipping the mixture while very slowly adding the powdered sugar, and finally mixed in the pureed and strained raspberries. 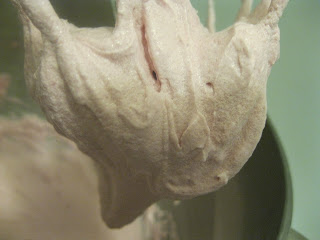 It was a little soft, so I refrigerated it before piping it onto the shells and making the cute little macaron sandwiches. 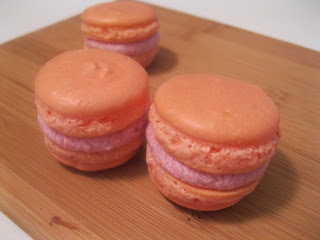 And yes, they have feet. The tops of the shells still aren’t quite smooth enough, so I’ll have to make more macarons.

It’s too bad Leigh will be back in Germany and unable to eat them for me. I’ll need to find other volunteers.