Southern Candy Kitchen: I Walked Through Flooded Streets for This?

After a pretty good meeting and successful delivery of banana chocolate chunk bread in Atlanta, I headed back to DC last night. I couldn’t be happier, because this is what Atlanta looked like the whole time I was there. 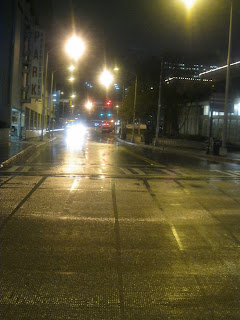 I wandered around for several blocks in search of some kind of food – something that was still open in downtown Atlanta at the late, late hour of 6:30 pm. And then the Underground Atlanta called out to me in the dark rain. 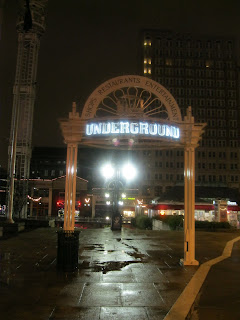 Underground = heat and no rain. Or so I hoped. I did, at least, find that. And I also found the Southern Candy Company inside. 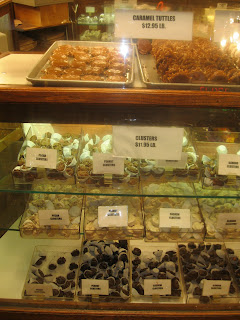 They appeared to have chocolate, and since I had found no other information about chocolate stores near downtown Atlanta, I picked up two pieces of candy to check out.

I started with a dark chocolate pecan cluster. 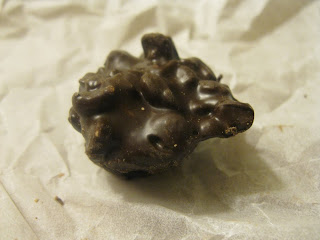 The chocolate itself carries a taste of vanilla, and is fairly soft for a milk chocolate. It happens to be about the same density as the pecans, which made it easy to bite into. Though the pecans weren’t roasted very well, they were chopped to a good size – not so small that they disappeared into the chocolate, nor so large that some bites involved only pecans. While neither the chocolate nor the pecans were anything outstanding, the cluster was well-mixed.

For comparison purposes (this is serious research, I tell you), I also picked up a milk chocolate pecan cluster. 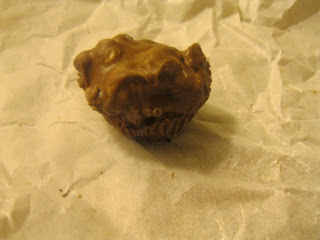 Just as with the dark chocolate pecan cluster, the pecans are well-chopped and well-distributed throughout. The milk chocolate has very little chocolate flavor, and is very sweet – it almost tastes like powdered sugar mixed with cocoa butter, with a hint of caramel flavor. It is also fairly firm for a milk chocolate, and doesn’t melt very well, but this works well with the pecans from a texture standpoint, as it prevents extensive separation on bites.

While these were “OK” and only cost me $1.20 total, it was not worth the walk through rainy, deserted downtown Atlanta streets. Seriously, Atlanta, this is the best chocolate you have available downtown? I’m unimpressed. Almost as much as I’m unimpressed with your street drainage, downtown energy, and availability of fresh fruits and vegetables.

Glad to be home. Obviously. I think I hear some Scharffen Berger calling my name.
Posted by Victoria at 9:01 AM