The Holiday Recipe Swap, hosted by My Baking Addition and GoodLife Eats, enters its third week today. And this is when things get serious. Really serious.

The sponsor for this week is Scharffen Berger.

Which means: they provide the prize.

Which means: The theme is chocolate. Any recipe that involves chocolate is legit for this week, so this chocolate cake with cookie-dough buttercream and whipped chocolate ganache is a the perfect candidate. 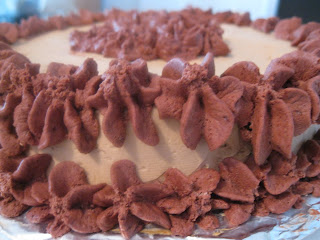 And that means that you should do this: Come join the fun at the My Baking Addiction and GoodLife Eats Holiday Recipe Swap Sponsored by Scharffen Berger.

Which is a nice way of saying please vote for this cake. I need that Scharffen Berger prize. In a bad, bad way. So I pulled out the best resource I had on hand: Nick Malgieri’s new cookbook, Bake!. 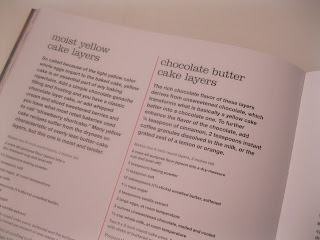 The first thing I had to tackler were some layers of chocolate butter cake, a recipe that I adapted to better fit my concept.

For the most important ingredient in the cake layers, I pulled out the best unsweetened chocolate I had: Scharffen Berger, of course. 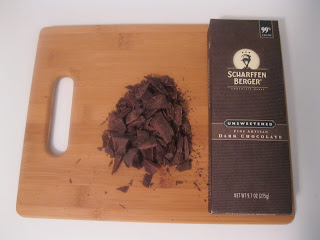 Making the batter for this cake is fairly straightforward: mix the dry ingredients, let them hang out on their own while creaming the butter and sugar, add the egg mixture and vanilla to the butter and sugar, then add the chocolate. After that, it was time to alternate mixing in portions of the dry ingredients (in three additions) and the cream (in two additions) until the batter is just mixed. 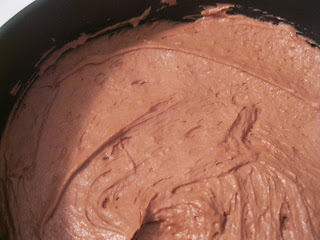 Once the cake cooled, I sliced it into two layers, and got to work on my cookie dough frosting.

Despite previous issues with making meringue buttercream, I decided to give this another stab, but this time, I used the detailed steps that Nick Malgieri outlines in his recipe of Perfect Meringue Buttercream, and adapted the recipe to flavor it and to make the right quantity of frosting.

I mixed the sour cream, molasses, salt, and vanilla together, and set these aside. These were what would make this taste like cookie dough.

Then it was time for the scary step of making meringue buttercream. I cannot possibly convey what Nick wrote here, but in his book, the instructions are flawless. You need his book.

Per his instructions, I whisked the sugar and egg whites over pot of simmering water until hot. 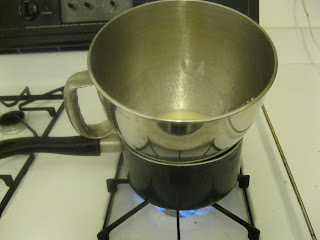 Then I immediately start beating the mixture at medium speed with the whisk attachment of stand mixer. Once the bowl is merely warm, instead of hot, I switched to the paddle attachment and beat at low speed until the bowl was cool. 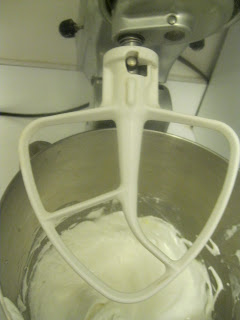 THEN, and only then, was it acceptable to add the butter. Once all the butter was incorporated, I increase the mixer speed to medium and let it run until I had a beautiful, fluffy buttercream. 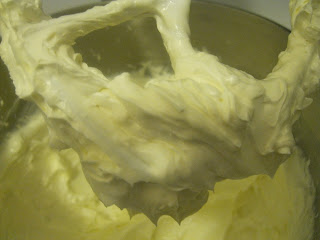 Then I added in the cookie-dough-flavoring mixture, whipped it up a bit, and had delicious frosting. 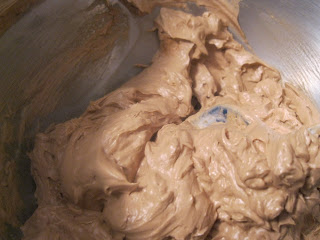 I frosted the two layers of chocolate butter cake. 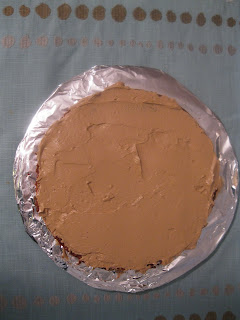 Then I wrapped this up, and set this aside in the freezer until the day it was getting consumed. It was then time to make some whipped chocolate ganache. Using Scharffen Berger bittersweet chocolate in a blatant attempt to get points with the contest sponsor, even though that doesn’t affect the results of the contest. 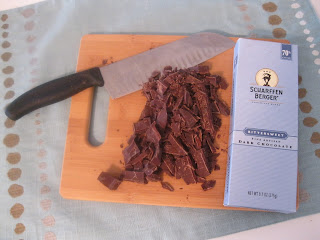 I melted this chocolate, and let it cool to room temperature as I whipped up a cup of heavy whipping cream until it was starting to take on some structure. 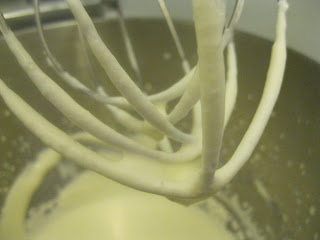 Then I added in the cooled, melted chocolate and whipped away some more. 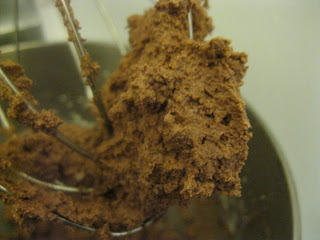 I finished the cake by piping the whipped ganache around the cake, and the bittersweet chocolate contrasted well with the sweet cookie-dough buttercream. 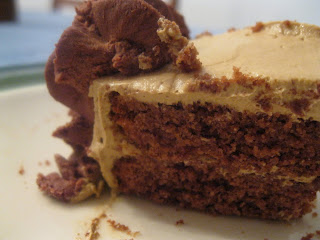 The folks who were at the Thanksgiving dinner I brought it to certainly enjoyed it. If it looks good to you, too, go vote for it!