As a regular reader of several chocolate, candy, and dessert blogs, I’ve heard quite a bit of buzz about John Kelly chocolates. Apparently, they are out in the Los Angeles area. As I have an upcoming business trip to that area, it seems like a place to check out.

Before I even got that chance, somebody gave me a package of Hawaiian Sea Salt Caramel Fudge Bites as a gift. 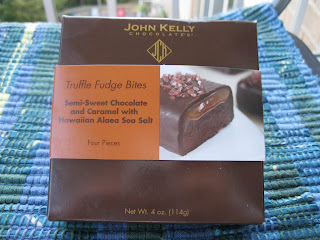 I mean seriously. Wow. Now I’ll know for myself whether it’s worth the stop during my trip.

A quick look at one of the fudge bites reveals that the sea salt isn’t very evenly distributed, which likely means that some bites wind up being quite salty while others lack bites. I generally prefer uniformity throughout a chocolate creation, but wasn’t about to let that stop me from checking out the chocolate itself. 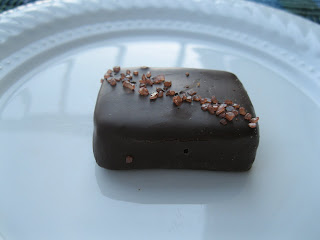 The interior is surprisingly not very sweet, which differentiates it from most fudges. It is best described as a cross between a ganache and a fudgy brownie, and while the creation title notes that this is a caramel fudge bite, little caramel flavor is evident. 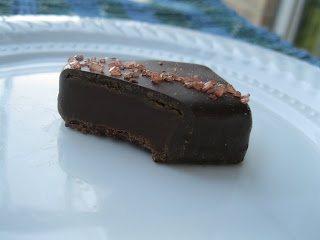 That being said, the interior is still soft, sweet, and subtly chocolaty, and is surrounded by a smooth, semi-sweet chocolate that gets just a bit lost between the fudgy interior and the decorative coarse salt. I was, however, quite impressed with how well that surrounding chocolate meshed with the texture of the soft interior, as there was no cracking of the couverture during the multiple enjoyable bites.

I remain undecided about stopping by the John Kelly shop in person. These fudge bites were pretty good, but I was disappointed by the lack of advertised caramel flavor and the uneven distribution of the sea salt.

Have you ever had anything from John Kelly? What did you think?