Not one to make a final determination on the quality of an entire line of chocolate based on one product, I wasn’t about to write off John Kelly chocolates as overrated based on the caramel fudge bites with Hawaiian sea salt.

Especially since, as part of the gift involving that first batch, I also received a package of Truffle Fudge Bites with French Grey Sea Salt. 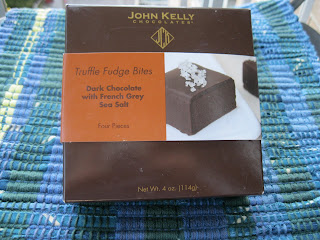 Again, the sea salt was arranged in a nice pretty pattern that would surely result in uneven taste. Folks, I like delicious AND pretty. Both can be done. Ask Vosges. 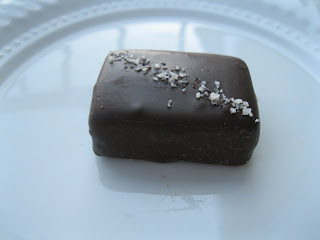 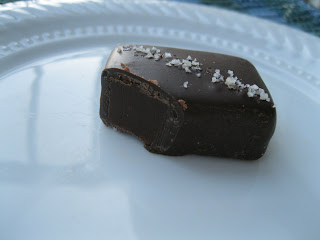 The couverture, which lacked distinctive flavor against the sweet, soft interior and the coarse sea salt sprinkles, was appreciably harder than the interior and crumbled away from the fudge. Though I adore the concept of chocolate covered brownies and truly enjoy the combination of chocolate and sea salt, the overall effect here wasn’t anything spectacular. I remain unconvinced that I need to drop by this shop when I’m in Los Angeles next month.

Do you think I should stop by the John Kelly shop? Or are there better chocolate stops in the LA area?