Since I do that running thing, everybody thought that this weekend’s Hot Chocolate 15k, which promised a chocolate party at the finish line, would be just perfect for me. 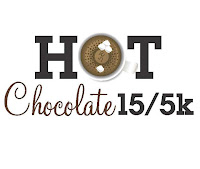 I agreed. So, I registered.

Oh, do I ever regret the day I did that. I could go into a massive critique of the race, but let’s just say that Jackie, Sarah and I had no idea what was in store for us as we drove to the National Harbor. 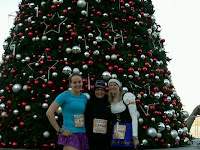 (Jackie wanted this picture because she figured nobody would believe that she had driven to a race with two other runners dressed like this.)

We foolishly thought that the worst event of the day was behind us when Sarah’s car wouldn’t start that morning. Um, no. We just ran over to my car and drove to the massive backup that was I-295 leading to the National Harbor.

Then we walked a mile and a half to the start line. And kids, that was after we paid $10 for our parking pass. We walked pretty quickly to try to make the starting time. Then, because of catastrophic organizational failure, we waited in the corrals until 70 minutes after racing time to start running.

At least it gave Sarah and I time to discuss recent poor life decisions we'd both made. And then we were sent off on the course, which may or may not have been short, to battle loose gravel paths, hairpin turns, and running against a freeway.

Rather than continuing to critique the race, let’s just do a numbers rundown:

Number of dead animals I had to run past on Indian Head Highway: 2

Number of Mack trucks I ran right next to on Indian Head Highway: 12

Number of times we tried to start Sarah’s car before jumping into my 17 year-old station wagon: At least 10

Number of Ghirardelli squares I stole at the finish line party: 20 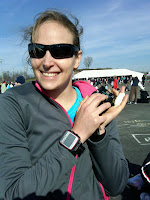 Number of runners who got a Garmin reading of 15k or more on the course: Zero

Number of obnoxious running costumes in our car: 2 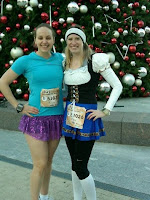 Number of times our $10 parking pass was checked: Zero

Number of miles walked between our car and the start/finish line: 3

Number of minutes Sarah and I spent discussing the 2012 racing season: At least 800

Number of times I will do this race again: Negative 14

Have you ever been to a poorly-organized race? Did you steal chocolate in revenge?