I dug into these chocolate covered pretzels by Snyders in the car this Saturday afternoon, and found a delightful combination of sugar and salt in each bite. 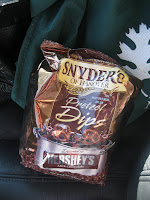 And that’s about the end of this review, because the reason I was eating them in the car on Saturday afternoon is that I knew I’d need some salt and sugar on the drive back from the Richmond Marathon.

Now, you might think “wow, that’s amazing,” or you might be one of my friends who has done 5+ marathons who is instead just thinking “so, did you sign up for the next one yet?”. But what I hope nobody is thinking is “I could never do that.”

The sad thing is, a spectator said that to me as I was walking back to my car. And I told him that was nonsense, because I had just done it with a bad kidney and asthma. Oh, and I broke a vertebrae 13 years ago, which resulted in permanent muscular structure changes in my back.

I don’t want to make this a post how anybody, baring severe physical disability, can train to run a marathon – you can instead read Susan’s post about how anybody can do an Ironman. What I do want to write about is the test that training for a marathon – not racing one – puts you through.

And what it does is test your physical and mental strength. Over and over and over. There’s no way to find out just how training for a marathon will do this to you without actually going through it. Of course, other undertakings are more difficult, and believe me, after finishing three degrees at MIT, I know what difficult means. But it’s a different kind of difficult that challenges what you thought you could do from the start of the training cycle 16-20 weeks before the race.

Now I know people go and run marathons without doing more than a handful of 10 mile training runs. They really miss out. They never get to find out what they’re truly capable of putting themselves through, and that is where the real stuff happens. Not on race day. In the four to five months before race day. I had a blast in the process (sick and twisted, I know), but there were a lot of times that I had to do ridiculous things to stay with the training plan.

And now I know I can do all these things. And more. Could you? Almost definitely. Will you do it? That’s up to you. You have to want it, obviously, since it’s not easy. Are you scared to find out that you can’t? It’s possible, and in fact, I think many people avoid challenges because they are afraid that they’ll find out what they can’t do.

And there just might be chocolate covered pretzels at the end.

(I’m writing about the actual race on Wednesday because that’s an entirely different set of semi-serious thoughts that generally don’t appear on this blog. So be ready for that awesomeness. I’ll even tell you my time.)